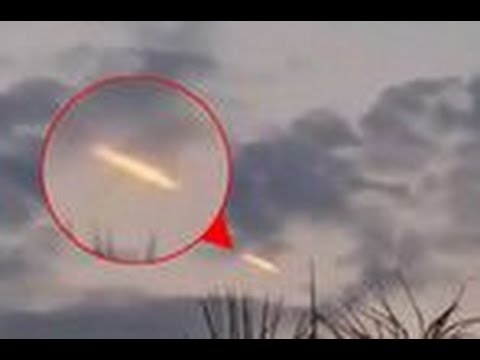 Sighting of unidentified flying objects are not rare with videos and images of such sighting popping up now and then. Few of them can be ruled out straight away as fakes, but there are those that baffle astronomers as well.

One such sighting was by a family in Darwin, Australia while they were hanging out by their pool. 40-year-old Quentin Theron was at the pool with his kids Kylie, 14, and Georgia, 8 when they saw a UFO zooming over their homes

From the video background chatter it is evident that the kids got excited by what appears to be some sort of a space rock burning up whilst hurtling towards earth. One of the family members is heard as saying “that’s a giant rock coming towards the earth”.

Alien hunters are quick to point out that it is yet another spacecraft of alien origin and is appears to be a glowing flat disc-shaped object hovering amongst the clouds. The video definitely is not of a craft ‘hovering’ in the clouds as it is most certainly moving in a linear direction.

Astronomer Geoff Carr spoke to the local news station, NT News, and clarified that the orange streak was definitely an unidentified flying object, but he doesn’t think that it is of alien origin.

The astronomer did have other explanations to give as well including the possibility that the orange streak was a result of a high-altitude military jet that had its afterburner on.

âOther than that it looks too slow to be a piece of space junk re-entering the Earthâs atmosphere”, Carr said. âIt may be an Iridium Flare â which is a large, cube-shaped communication satellite. These appear to flare up sometimes extremely brightly if at the right angle to catch the sunlight.”