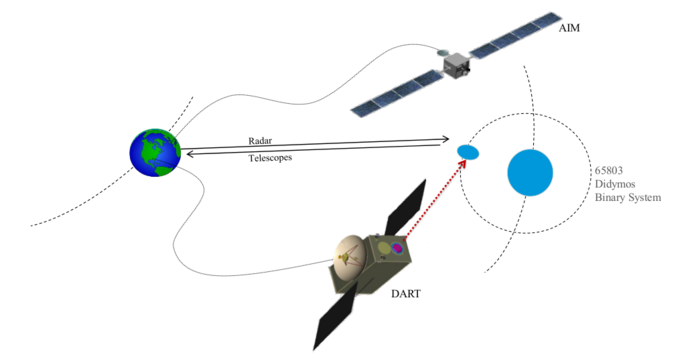 A multi-agency effort will see a spacecraft being crashed into an asteroid in 2022 providing us the opportunity to gauge our abilities to impact potentially hazardous near-Earth asteroid and to measure and characterize the deflection caused by the impact.

According to the plan, two spacecrafts will be launched in October 2020 for an encounter with binary asteroid 65803 Didymos (1996 GT) in October 2022. ESA says that the asteroid provides the optimal target for such mission allowing an impact on Didymos’ secondary body to change its orbital period around the primary by an amount measurable both from ground observatories and from a rendezvous spacecraft.

Out of the two spacecrafts – one will be an asteroid impactor that will be from NASA Double Asteroid Redirection Test (DART) Mission led by the John Hopkinsâ Applied Physics Laboratory in the United States, while the other will be the an asteroid rendezvous spacecraft part of ESA Asteroid Impact Mission (AIM).

Scientists were told at the conference that each of the experiments have been provided equal timing and despite being a join operation, the two spacecrafts have the ability to continue on their missions independently of each other. This means that if for some reason, one of the spacecrafts isn’t able to contribute to the joint campaign, the other will continue to work and achieve the individual mission goals.

The AIDA mission will be the first space experiment to demonstrate asteroid impact hazard mitigation by using a kinetic impactor to deflect an asteroid.

AIDA will return vital data to determine the momentum transfer efficiency of the kinetic impact and key physical properties of the target asteroid. The two mission components of AIDA, DART and AIM, are each independently valuable, but when combined they provide a greatly increased knowledge return. AIDA will provide us with a unique insight in asteroids’ strength, surface physical properties and asteroids’ internal structure. Linked with the DART mission, the AIM mission (in addition to the science return AIM has by itself) will provide data on the size and shape of the crater. There is great benefit to obtain the size of the crater in addition to the momentum transfer measurement. Indeed, it is well known that effects of porosity and strength of the target are hardly separable unless both the crater size and the momentum transfer efficiency are characterized. Using data of both missions will thus allow us to probe the internal structure of the target, and determine its influence on the impact process. While the change in orbit period caused by the impact will be easily detectable from Earth, any change in orbit inclination or eccentricity will very likely be too small to be measured directly without AIM.

AIDA will return valuable information on the mechanical response and impact cratering process on the real-asteroid scale and will, therefore, have major implications for planetary defense, human spaceflight, and near-Earth object science.