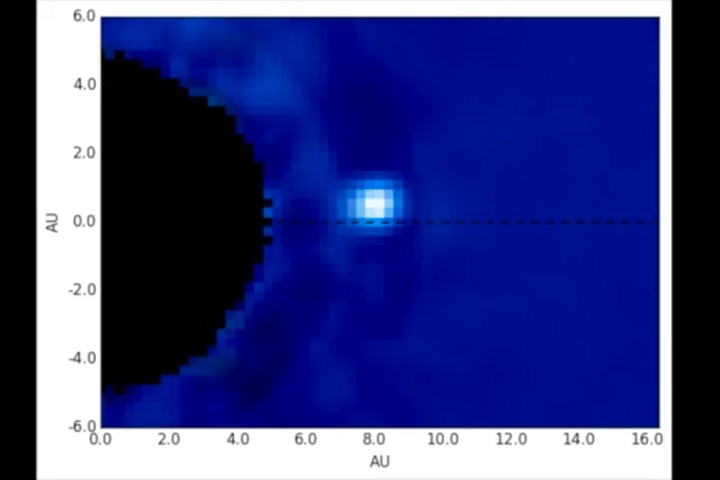 Hard work of researchers at University of Toronto has culminated into a study showing off the motion of an exoplanet in motion around a distant star capturing using Gemini Planet Imager (GPI) instrument.

The study, published in the Astrophysical Journal, is based on the observations made by researchers using the GPI on the Gemini South telescope in Chile. Using the state of the art equipment, researchers have captured a series of images over eighteen month period from November 2013 to April 2015 and stitched those together to provide us a view showing off the orbital motion of the exoplanet “ÃÂ² Pic b” around its star.

First discovered in 2008, “ÃÂ² Pic b”ÃÂ orbits its star over 22 years. The exoplanet is said to be a gas giant like Jupiter. The images captured by researchers including Maxwell Millar-Blanchaer, a PhD-candidate in the Department of Astronomy & Astrophysics, University of Toronto, show off the exoplanet’s motion over the course of one and a half years.

Ã¢â¬ÅThe images in the series represent the most accurate measurements of the planetÃ¢â¬â ¢s position ever made,Ã¢â¬Â says Millar-Blanchaer. Ã¢â¬ÅIn addition, with GPI, weÃ¢â¬â ¢re able to see both the disk and the planet at the exact same time. With our combined knowledge of the disk and the planet weÃ¢â¬â ¢re really able to get a sense of the planetary systemÃ¢â¬â ¢s architecture and how everything interacts.Ã¢â¬Â

According to researchers, their study puts forward more refined measurements of ÃÂ² Pic bÃ¢â¬â ¢s orbit and the ring of material circling the star which shed light on the dynamic relationship between the two. It also includes the most accurate measurement of the mass of ÃÂ² Pictoris to date and shows it is very unlikely that “ÃÂ² Pic b”ÃÂ will pass directly between us and its parent star.

Astronomers have discovered thousands of exoplanets, but have only managed to image a few directly. Thanks to GPI, astronomers are not able to image the actual planet – a capability that provides a much more clear understanding of the dynamics at play when it comes to planets, their host stars, and other celestial objects that may accompany such a system.

Direct imaging of the planets is made possible by GPIÃ¢â¬â ¢s adaptive optics that sharpen the image of the target star by cancelling out the distortion caused by the EarthÃ¢â¬â ¢s atmosphere and then blocking the bright image of the star with a device called a coronagraph, revealing the exoplanet.

Ã¢â¬ÅItÃ¢â¬â ¢s fortunate that we caught ÃÂ² Pic b just as it was heading backÃ¢â¬âas seen from our vantage pointÃ¢â¬âtoward ÃÂ² Pictoris,Ã¢â¬Â says Laurent Pueyo, who is with the Space Telescope Science Institute and a co-author on the paper. Ã¢â¬ÅThis means we can make more observations before it gets too close to its parent star and that will allow us to measure its orbit even more precisely.Ã¢â¬Â