Sumatran rhinos are on the brink of extinction, IUCN warns 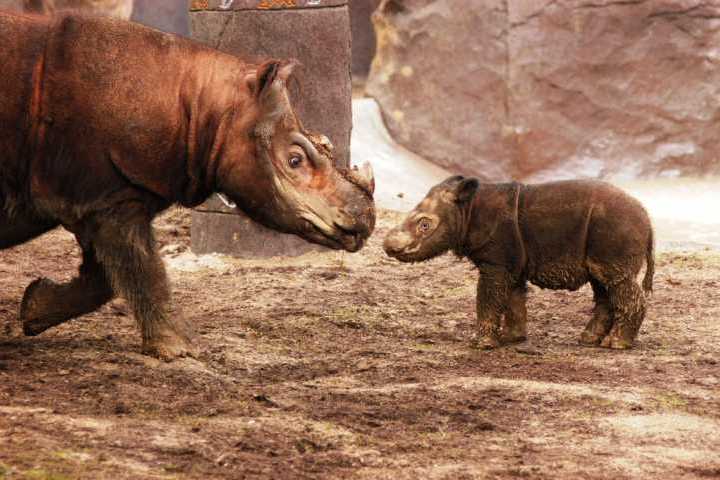 The International Union for Conservation of Nature (IUCN) has issued a warning on World Rhino Day saying that with less than 100 Sumatran rhinos surviving in the wild, the rhino is on the brink of extinction.

The organisation, which is also known as the keeper of the Red List of endangered species, called upon the Indonesian government to take some concrete steps to ensure that the Sumatran rhino survives and recovers.

The rhino is already presumed as being extinct in the wild in Malaysia. Once seen in almost the entire South-East Asian countries including Bangladesh, Bhutan, Brunei Darussalam, Cambodia, India, Lao PDR, Myanmar, Thailand and Viet Nam, the rhino is listed as Critically Endangered on the IUCN Red List of Threatened Species.

According to latest information from IUCN Species Survival Commission (SSC) Asian Rhino Specialist Group, there are only a few wild Sumatran rhino in a few sites in Sumatra, and only a handful of individuals are believed to survive in Kalimantan, Borneo.

Malaysia was once considered as one of the last strongholds for the Sumatran rhinos, and with no rhinos now present in the country, the future of this species is increasingly becoming bleak.

Some of the main reasons behind decline of the population of these rhinos is extensive poaching crisis, and loss of habitat.

Because of increased decline in their numbers, the rhinos are now facing another issue – decreased breeding rate because of unavailability of breeding partners. Unable to breed regularly, isolated females are at risk of developing tumours in their reproductive tracts leading to infertility and further exacerbating the decline, IUCN notes.

Urgent measures for saving the Sumatran rhino were agreed in October 2013 at the Asian Rhino Range States Meeting in Indonesia, and have since been used to develop a new recovery plan for the species. The Indonesian Government now needs to allocate funding for the implementation of the plan, and to ensure that a system is in place to make urgent, rapid and bold decisions as the plan is implemented, according to IUCN.

Alongside developing intensive protection zones and consolidating isolated animals into larger populations, managed breeding is one of several key strategies needed to save the species. As part of the global effort to save the Sumatran rhino, a young male named Harapan, born at the Cincinnati Zoo, will join five other rhinos at the Sumatran Rhino Sanctuary in Sumatraâs Way Kambas National Park next month.

âIt is hoped Harapanâs relocation will further accelerate conservation breeding of the species in captivity,â says Bibhab Kumar Talukdar, Chair of the IUCN SSC Asian Rhino Specialist Group. âBut the long-term future of the species will ultimately be decided by the actions of the Indonesian Government and civil society. We need effective collaboration between government agencies and conservation institutions, allocation of significant funds by the Indonesian Government and international donors, as well as strengthened support from the public.â

The Sumatran rhinoceros (Dicerorhinus sumatrensis) is the most threatened of all rhino species due to its rapid rate of decline. It is also the smallest and the hairiest species and the only Asian rhino species with two horns.