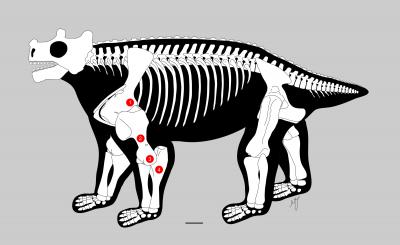 Researchers have revealed details of a certain pre-reptile that may have been the first to walk on all four limbs some 260 million years ago.

Bunostegos akokanensis, the pre-reptile, is said to have stood and walked on all fours like a cow or a hippo. The creature is part of the pareiasaurs family members of which lived in the Pangea supercontinent during the Permian era some 260 million years ago and sprawled using limbs that jut out from their side of the body.

The lead author of the study Morgan Turner expected Bunostegos akokanensis to be a sprawler as well but the fossils indicated otherwise.

Co-author Linda Tsuji of the Royal Ontario Museum, discovered the fossils in Niger along with Christian Sidor while a student at the University of Washington and a team of paleontologists in 2003 and 2006. Careful analysis of the fossils revealed that the Bunostegos may have stood and walked like a cow, and would have been about the same size.

“Imagine a cow-sized, plant-eating reptile with a knobby skull and bony armor down its back,” said co-Tsuji.

About the same size as a cow, this pre-reptile also stood the same way — upright with its legs underneath. It may be the earliest known creature to do so, according to a new study. Credit: Morgan Turner

Turner and team analysed the fossils and the key areas of the skeleton that revealed details about the manner in which Bunostegos walked were the shoulder joint, humerus, elbow joint and the ulna.

The analysis showed that starting at the shoulder joint the orientation of it is facing down such that the humerus (the bone running from shoulder to elbow) would be vertically oriented underneath. It would restrict the humerus from sticking out to the side, too.

The humerus isn’t twisted as in case of sprawlers suggesting that only if the elbow and shoulders were aligned under the body could the foot actually reach the ground. The elbow joint and the ulna also gave away some important clues that filled in the gaps required to understand the posture of the Bunostegos.

Back in those days Niger was an arid place where plants and water sources might well have been few and far between. Scientists have associated walking upright on all fours with a more energy efficient posture than sprawling. For the long journeys between meals, Turner said, the upright posture might have been necessary for survival.