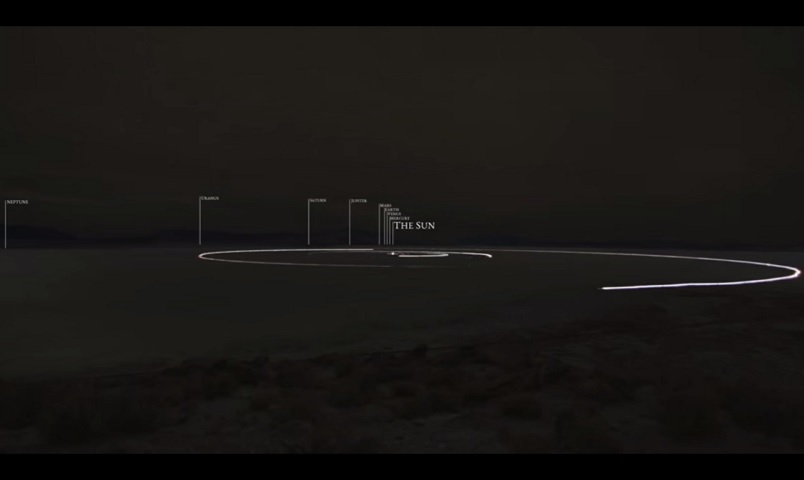 A couple of filmmakers thought of an innovative way to develop a to-scale model of our Solar System and the result of their work is a dazzling light show in Black Rock desert, which they captured on camera.

Spread out in the emptiness of the desert are a set of marbles representing our planets set around a scaled down model of the Sun. Mix in a little creativity, lights, and drone surveillance and what you get is an amazing view of our solar system .

The work is a result of a question – what would a to-scale model of our Solar System look like? To answer this question, two friends, instead of creating the scale of the Solar System on a paper or a computer, headed out to a 7-mile stretch of Black Rock desert in Nevada and created the model on the desert itself.

According to Wylie Overstreet, one of the filmmakers, all the to-scale models of the Solar System – specifically the images they have come across on the web or in print of the planets, moons, the sun and solar system in general – are not to-scale and they show these celestial bodies quiet near to each other with not so accurate sizes.

But that’s not the case says Overstreet. When we put things to scale, Earth is just about the size of a marble in the desert and that’s what they wanted to show. If the celestial members of our Solar System are drawn out to scale on a piece of paper, they go microscopic, Overstreet says.

“There is literally not an image that adequately shows you what it actually looks like from out there”, Overstreet says. “The only way to see a scale model of the solar system is to build one” and that’s why they went to the Black Rock Desert.

Having planned out the things already beforehand, the Overstreet, Alex Gorosh, and others had 36 hours to finish what they intended to do. The team first went ahead and designated a spot for the Sun, then started creating orbits around our star for each of the planets and planted a glass sphere for each of the planets and the corresponding colour as they are visible from space.

Having mapped out the entire Solar System with Neptune at the edge, the team drove each orbit with a light and captured the footage through a drone so as to provide us with an idea of how big the solar system is and how small the planets are when they are put to scale.

To check if the scaled version of the Sun they had created was correct, Wylie held the model Sun at sunrise to show that it was just about the same size as the actual size of the Sun from Earth’s perspective.

The final results is like a dazzling light show and is indeed one of the best representations of the Solar System we have seen so far, though not precise when it comes to orbital periods between the planets.