Yet another alleged ‘pyramid’ sighting on Mars! 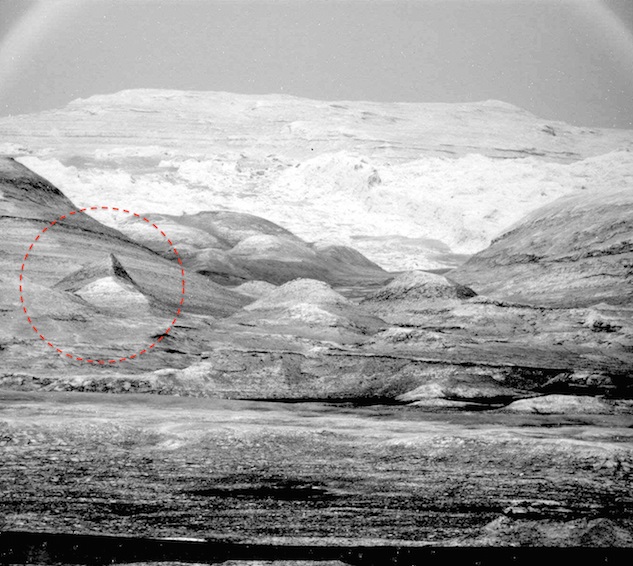 Search for extraterrestrial life is on with NASA, SETI, and international figures saying that it is a matter of time before we find some form of life in an alien world.

However, there is a faction of community on Earth that believe that they already have spotted signs of present or past life in our solar system itself. Mars comes up every now and then it when it comes to ET and with NASA’s rovers and spacecrafts actively exploring the Red Planet, UFOlogisits are increasingly coming up with so called proofs that Mars did have intelligent life forms and could very well be harbouring it now.

Scott C. Waring of UFOSightingsDaily.com is one such UFOlogist who continuously publishes ‘proofs’ that according to him substantiate presence of aliens here on Earth as well as other parts of the Solar System. In a recent post, he published a photo that was captured by NASA’s Curiosity Mars rover. The image in question provides full view of the mountains on the planet and as such images are quite rare, Waring took a closer look and according to him a ‘pyramid’ nestled into the hillside quickly caught his eye.

Waring says that the images may have been captured from a distance of 1.5 kilometers and that puts the height of the ‘pyramid’ at 75-100 meters. At this height, it may not be a pyramid but Waring says that “its edges do not lie.”

“Part of its corner is under the dirt, but most of this structure is visible. It also looks like two or there other structures to the right that are totally under the dirt”, he adds further.

Pyramid claim not the first

This is not the first time that UFOlogists have claimed to have discovered pyramid on Mars. Earlier in June this year, a YouTube channel ParanormalCrucible that focuses on the hunt for ET life, claimed to have spotted a pyramid in one of the images captured by Curiosity Rover. [Video embedded below]

All viewers were not convinced with the finding with many pointing at similar rock formations on Earth and the shadows they generate giving an illusion that they were pyramids. However, the channel owner is not convinced and continues to upload more stuff to propagate his agenda.