Saturn’s Enceladus has a global ocean below its icy crust 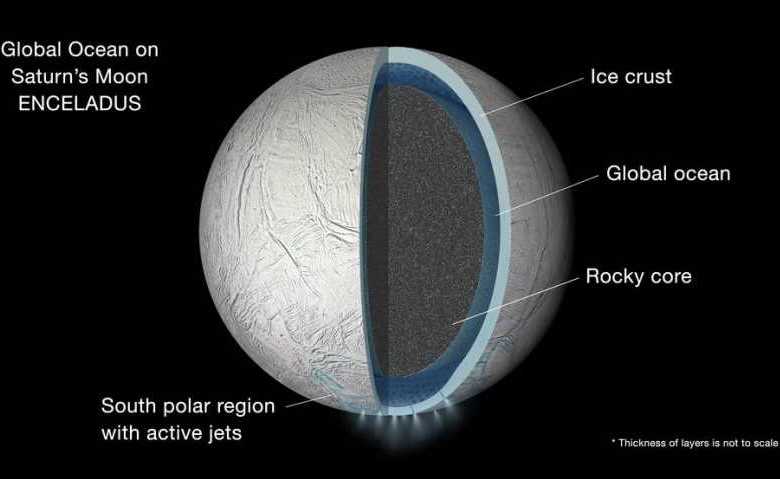 First geysers, then regional water body under the south pole and now a global ocean – Saturn’s Enceladus is proving to be a scientific goldmine and researchers are all over it.

According to a recent study by researchers at Cornell University and SETI Institute, Enceladus packs not just a regional water body, but a large oceans that covers the entire moon below its icy crust. The findings have raised hopes that Saturn’s moon could be harbouring life in some form.

Pain-staking image analysis by hand new dynamic modeling techniques and top-notch statistical analysis has led researchers to the discovery. The team pointed out that there are tiny wobbles in Enceladus as it orbits the planet and that small motion called libration are far larger than if the surface crust were solidly connected to the satelliteâs rocky core.

For the study, Peter Thomas, Cornell research scientist, and Matthew Tiscareno, who left Cornell in the summer to join the SETI Institute in Mountain View, California, painstakingly analysed over seven years worth of Cassini images and hand-pointed Enceladusâ topographic features including the wobbles that gave way the global ocean underneath the icy crust.

Interest in Enceladus first sprang up when Cassini images of the moon showed fine spray of water vapor, icy particles, and simple organic molecules erupting from fractures near Enceladusâ south pole in 2006. This led scientists to carry out measurements of the saltiness of geyser particles in 2009 based on which they said that the geysers must be emanating from a liquid reservoir. Subsequent studies in 2014 demonstrated that the liquid reservoir is at least a regional sea underlying the entire south pole region.

âThis exciting discovery expands the region of habitability for Enceladus from just a regional sea under the south pole to all of Enceladus,â said Tiscareno, a Cassini participating scientist at the SETI Institute, Mountain View, California, and a coauthor of the paper. âThe global nature of the ocean likely tells us that it has been there for a long time, and is being maintained by robust global effects, which is also encouraging from the standpoint of habitability,â he said.

Tiscareno developed a series of dynamical models of this wobble, technically called a libration, and Thomasâs group then tested each model against hundreds of Cassini images, taken of Enceladusâ surface at different times and from different angles, to find the best fit to the observations with extreme precision. The team plugged their best-fit value for the wobble into different models for how Enceladus might be arranged on the inside, including ones where the moon was frozen from surface to core.

“This is a major step beyond what we understood about this moon before, and it demonstrates the kind of deep-dive discoveries we can make with long-lived orbiter missions to other planets,” said Carolyn Porco, Cassini imaging team lead at Space Science Institute, Boulder, Colorado, and visiting scholar at the University of California, Berkeley, and a coauthor of the paper. “Cassini has been exemplary in this regard.”