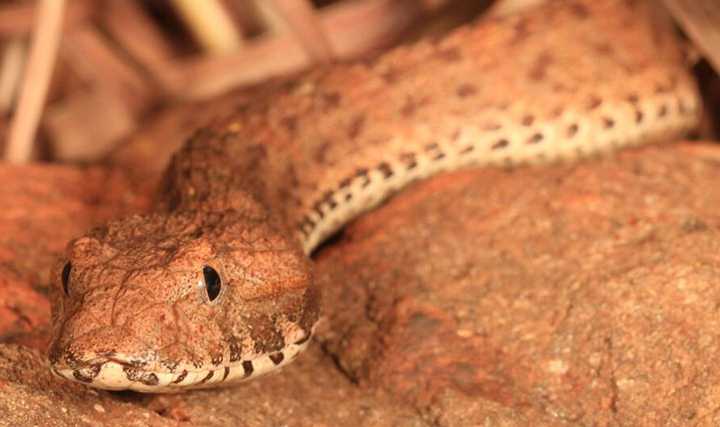 A collaborative effort of Natural History Museum, Western Australian Museum and Bangor University has led to discovery of a new species of highly venomous death adder snake in Australia. The new species has been named Acanthophis cryptamydros.

The discovery was made while scientists were studying the genetics and ecological characteristics of snakes living in the Kimberley region. Also known as the Kimberley death adder, the new species is a ‘sit-and-wait’ predator – meaning that it stays camouflaged and waits for an opportune moment to ambush any passing prey including frogs, lizards or small mammals. Scientists have named the snake using Greek words kryptos (cryptic, hidden) and amydros (indistinct, dim).

The new species of death adder has a diamond-shaped head and stout body. The best way to recognise the snake is through the slightly higher number of typically unpigmented scales on its underbelly.

Researchers not that the snakes it most closely resembles aren’t actually its genetic relatives and this indicates that the similarity between this particular death adder and other snakes in the region could be a result of evolutionary convergence.

Evolutionary convergence is where species that arenât close genetic relatives end up with the same traits because they share similar environments explains Simon Maddock, the PhD student at the Natural History Museum and University College London.

Researchers are not sure about the population of these snakes in the wild, but are of the opinion that it will probably be rare. While their numbers are still unknown, researchers say that like other death adders in the region, Acanthophis cryptamydros is also under threat because of the invading wave of highly poisonous cane toads.

“It looks like populations of death adders in general are declining in the area,” Maddock says, “and there are records of them eating these poisonous cane toads. Itâs potentially a big threat.”

The cane toads could be moving west at a rate of 40 to 60 kilometres each year, according to analyses by scientists at the canetoadsinoz.com website. Maddock and his team think that a detailed assessment of potential threats to the Kimberley death adder, including cane toads, will lead to its listing as a species requiring protection under Australian state or federal legislation.