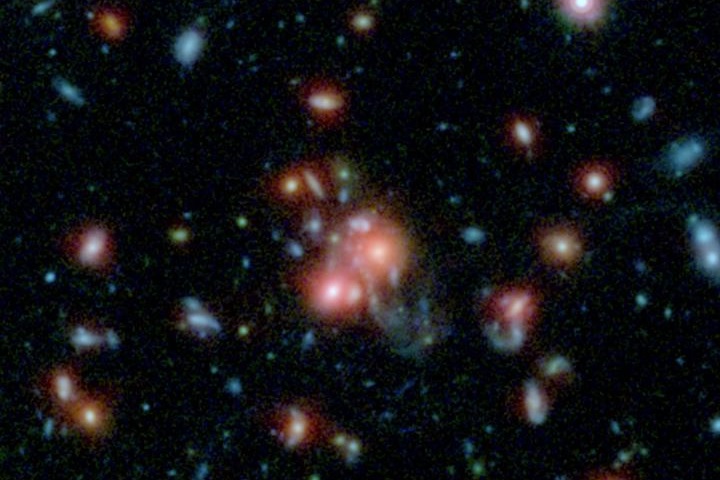 Astronomers have discovered a galaxy cluster with a highly active core producing about 800 stars per year some 9.8-billion light years away and according to scientists the core is the first example of wet merger of galaxies in action.

The discovery was made using some of the most advanced telescopes here on Earth as well as in space including the NASA/ESA Hubble Space telescope. The cluster of galaxies is called SpARCS1049+56 is very old cluster of galaxies believed to have been formed in the very early Universe some 4 billion years after the Big Bang. Out of the 27 galaxies in the cluster, astronomers are particularly interested in the core of the cluster which house a massive galaxy.

Using the Hubble Space telescope, the astronomers made observations using visible light and this helped them pinpoint the reasons behind the glow and the star formation. Researchers revealed that a relatively smaller galaxy filled with gas merged into the larger galaxy at the core of the cluster lending its gas to the larger galaxy and igniting a furious episode of new starbirth spitting out as many as 800 stars per year. In comparison our Milky Way hardly forms two new stars per year.

This image, using data from Spitzer and the Hubble Space Telescope, shows the central region of the galaxy cluster SpARCS1049. The brightest cluster galaxy in the center of the cluster is currently undergoing a wet merger which produces enormous amounts of new stars. The tidal tail â an indicator of the merger â as well as the brightest cluster galaxy itself are shown.

“Building on our other observations, we used Hubble to explore the galaxy in depth – and we weren’t disappointed,” said co-author Adam Muzzin of the University of Cambridge, UK. “Hubble found a trainwreck of a merger at the centre of this cluster. We detected features that looked like beads on a string.”

Researchers say that their finding is a conclusive evidence of a wet merger – a phenomenon occurring as a results of collision of two gas-rich galaxies and leading to formation of what is called Beads on a string. There have been prior discoveries that signaled wet merger, but the star formation wasn’t at as high the rate in SpARCS1049+56.

The team is now looking to find if such a growth mechanism is common in galaxy clusters and if so, what are the chances that there are “messy eaters” out there similar to SpARCS1049+56, which also munch on gas-rich galaxies? SpARCS1049+56 may be an outlier – or it may represent an early time in our Universe when messy eating was the norm.

The study describing the findings has been published in The Astrophysical Journal.