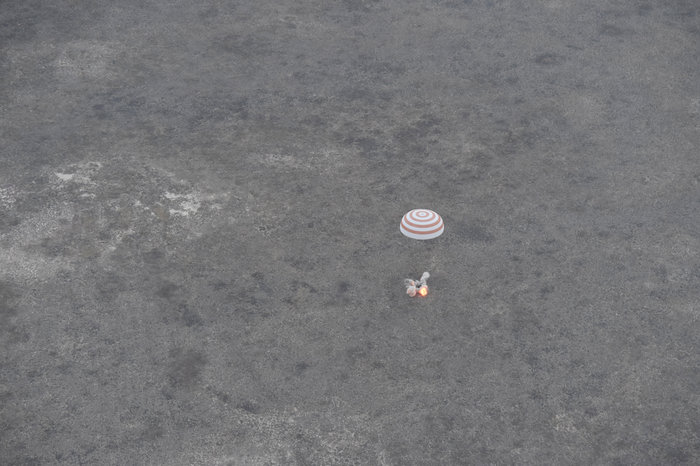 Three astronauts including ROSCOSMOS’ Gennady Padalka, who logged a record 879 days in space on five flights, have safely returned to Earth from the International Space Station (ISS).

The return marked an end to 168 day stay of Expedition 44 commander Padalka on the ISS who now holds the record of being in Space for the longest – over two months more than cosmonaut Sergei Krikalev, the previous record holder. Padalka was accompanied by visiting crew members Andres Mogensen of ESA (European Space Agency) and Aidyn Aimbetov of the Kazakh Space Agency. Mogensen and Aimbetov were on the ISS for 10 days each.

Padalka has been a very busy astronaut on the ISS. During his stay, he carried out one space walk to retrieve Russian experiments, piloted his Soyuz spacecraft in a relocation maneuver in August, helped scientists on Earth with a number of health related experiments including those that related to bone density, weakened muscles, reduced heart function, exposure to radiation, nutrition deficiencies and immune system problems as well as a loss of sleep and psychological problems while being in space. He also one of the astronauts who tasted the lettuce grown in space.

Mogensen and Aimbetov participated in a number of experiments on behalf of their respective space agencies including those to do with areas of human research, Earth observation and technology development.

Andreas became Denmarkâs first astronaut when he left our planet on 2 September on his 10-day iriss mission. Andreas filtered Station waste water through a âbiomimeticâ membrane from Denmark; operated two rovers from the orbit; wore the tight SkinSuit for two days to test its effectiveness for preventing astronautsâ spines stretching in weightlessness; and took microbiological samples to discover if it stays clean enough to wear for long periods among other experiments.

Some of the experiments that returned to Earth from the ISS include blood samples for NASAâs Twins Study. This will allow NASA to carry a range of studies that will allow the space agency to understand the effects of long duration spaceflight and further NASAâs use of personalized medicine in space. Additional samples for the Salivary Markers and Microbiome studies also returned to Earth.

In less than three months, ESAâs next astronaut to go to space, Timothy Peake, will depart on his five-month Principia mission â launch is set for 15 December.

The undocking of the Soyuz marked the beginning of Expedition 45 with NASA’s Kelly Scott in command. The other crew members are Kornienko, NASAâs Kjell Lindgren, Russian cosmonauts Sergey Volkov and Oleg Kononenko and Kimiya Yui of the Japan Aerospace Exploration Agency. Expedition 45 will continue research and operational support of the station as it passes through the 15th anniversary of a permanent human presence on the laboratory that will be marked on Nov. 2.