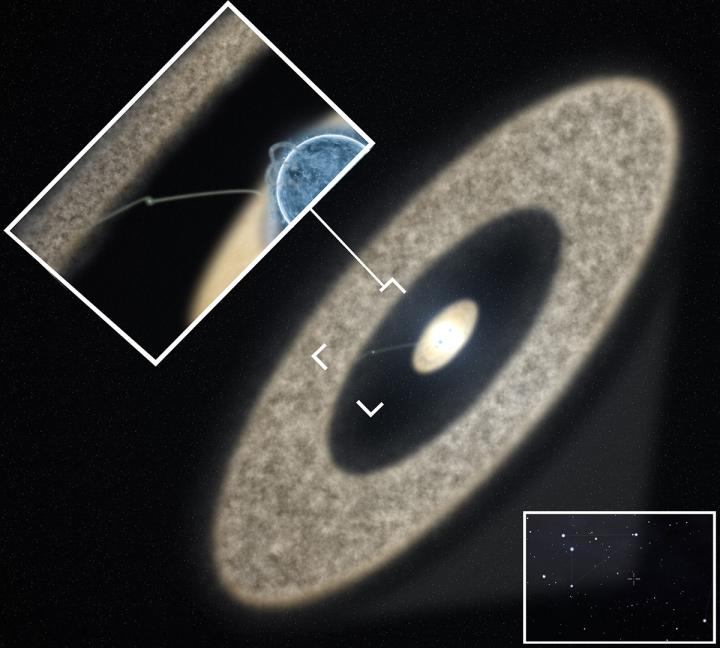 Researchers, have for the first time, managed to get a glimpse of the ‘amniotic sac’ of a young star garnering unprecedented insight into the earliest life of planet-hosting stars.

Observed by researchers at University of Leeds using the Very Large Telescope Interferometer (VLTI), the star dubbed HD 100546 is still a very young star – only a thousandth of the age of the Sun – and is located at a distance of 325 light-years from us.

The study is phenomenal owing to the fact that it is for the first time ever that researchers have managed to get a glimpse of the innermost parts of the protoplanetary disk surrounding a young star. Lead author Dr Ignacio MendigutÃ­a from the School of Physics and Astronomy at the University says that the surprising bit about the observation is that the emission is sort of ‘barren’ as if there is no signs of active planet formation.

An artist’s impression of the HD 100546 system. A planet that is still in the process of forming could be boosting a transfer of material from the gas-rich outer part of the disk to the inner regions. Credit: David Cabezas Jimeno (SEA)

Researchers found through their observations that within the protoplanetary disk is a massive gap that is devoid of any material. Researchers theorize that within this gap could be planet(s) which is/are still forming. Another startling find about this gap is that it is ten times the size of the space that separates the Sun from the Earth.

Scientists say that for the innermost planetary disk to survive, there has to be a continuous supply of material from somewhere because the star is constantly engulfing material from the innermost parts of the disk. This constant supply of the material, researchers say, could be coming from farther away in the disk from where material is being pulled by the gravitational pull of the still forming planet(s).

“With our observations of the inner disk of gas in the HD 100546 system, we are beginning to understand the earliest life of planet-hosting stars on a scale that is comparable to our Solar System,” concludes Professor Rene Oudmaijer, a co-author of the study, also from the University’s School of Physics and Astronomy.

The findings are published in the journal Monthly Notices of the Royal Astronomical Society.