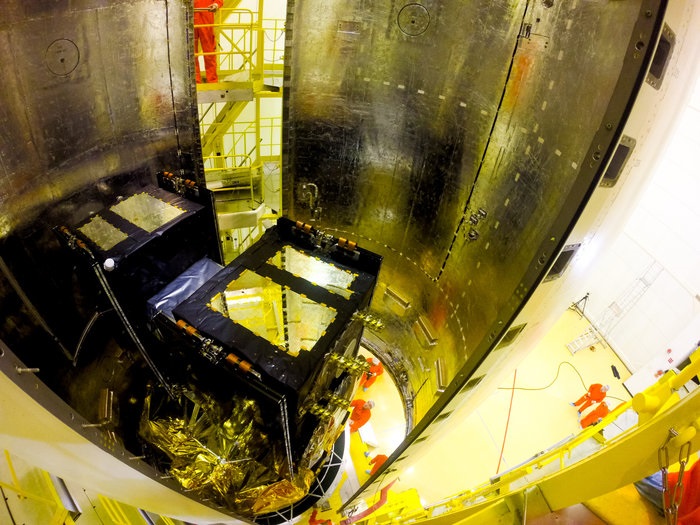 Europe’s next two satellites in the series of Galileo satellites are finally ready for launch after a string of delays and have been positioned atop the Russian Soyuz ST-B launcher for their scheduled launch on Friday.

Launching from Europe’s spaceport in Kourou, French Guyana at 0208 GMT Friday, satellites 9 and 10 are part of the fifth Galileo launch, which will bring the total number of satellites in space up to 10.

Comprising of a total of 30 satellites (24 in orbit and 6 spares), the Galileo programme is Europe’s bid to do away with USA’s GPS and navigation system.

With the launch of satellites 9 and 10 a third of the service will be active and Europe plans to make the service available by the end of 2016, while the system completion of the 30-satellite Galileo system is expected by 2020. The project is co-funded by the ESA and the European Commission.

Last week, the Galileo satellites saw themselves lowered atop a Russian-made Fregat-MT upper stage enclosed within the Soyuz rocketâs payload fairing. The encapsulation ended with the addition of the Galileo logo on the side of the sealed fairing.

The move marked the completion of the âupper compositeâ consisting of two Galileo spacecraft, a two-piece protective payload fairing and the Soyuzâs Fregat upper stage.

The complex structure was then transferred to the Soyuz launch pad and was hoisted up to the top of the Soyuz tower to be joined to the other stages.

Europe has already spent over five billion euros ($5.5 billion) on the Galileo satellite project and has an approved budget of an additional seven billion euros until 2020.

Two further satellites are scheduled for launch by end of this year. One is under test at ESAâs ESTEC technical centre in Noordwijk, the Netherlands, while the other has already completed its checks and is awaiting shipping to Kourou in the second half of October.

In addition, the first satellite of the following batch (Galileo-13) is undergoing its thermalâvacuum test at ESTEC, while the second (Galileo-14) arrived on Monday.