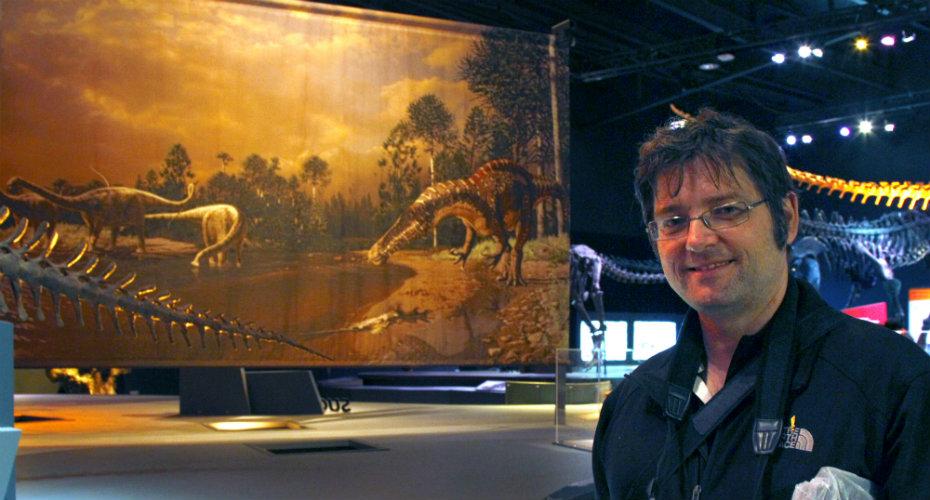 People may not always pursue carriers in what they have specialised in through their academics and one of the best examples of this could be Julius Csotonyi, who is a microbiologist by studies, and an artist by passion.

The famous paleoartist and natural history illustrator is known for his dinosaur paintings and illustrations right from his initials days when his work was being featured in the Prehistoric Times. Some of Csotonyi’s work is currently on display at Science World in Vancouver.

The full-of-life paintings of dinosaurs by Csotonyi look so much real that observers at times feel as if the animals might just come out of the painting, trample anything and everything that comes in its way and make a dash for the open.

Having grown up like any other kid on the block drawing dinosaurs in the childhood, the paleoartist didn’t give up his drawing habits and continued his artwork well into his studies and even during his research. He has been involved with sketching of dinosaurs for Prehistoric Times and other similar publications.

Things changed when Csotonyi got his ultimate break in 2005 when an English publisher who were working on a dinosaur encyclopedia called him up and offered him the work of illustrating the different dinosaurs. Paleoartist realised that his passion for dinosaur paintings could very well earn him a living.

Csotonyi holds a PhD in Microbiology and though he isn’t directly involved in research, he says that he has an indirect involvement because of his paintings. “My scientific training has been instrumental in informing my artwork, and I am also happy to retain one foot in both camps of art and science as I work closely with scientists”, said Csotonyi in an interview.

According to the paleoartist, science and art are intertwined and are mutually beneficial and help each other excel. This, he says, is particularly true for paleontology and paleoart, where visualizing the life appearance of the subjects of paleontological study is only possible through paleoart.

Because, paleontologists increasingly hire paleoartists to prepare artwork to accompany their work, and paleoartists derive all of their reference material from the productive work of paleontologists, they are effectively helping each other excel in their own fields.

Csotonyi also has a keen interest in search for life beyond earth, but not intelligent life necessarily. That’s his ideal, blue sky project from the scientific perspective. As an artist, he wants to continue illustrating the bizarre newly described life from Earthâs ancient past, and to create fine art that helps inform people about species that desperately need our help to survive.