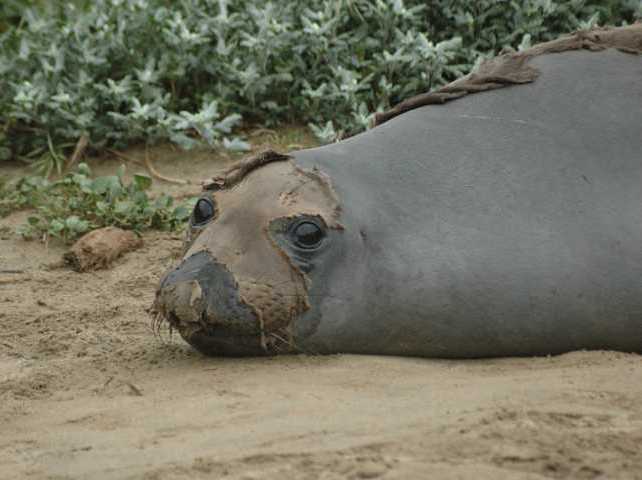 Researchers have long been looking for a reason as to why there were seasonal elevated levels of mercury in coastal water near elephant seal rookery at AÃ±o Nuevo State Reserve and it seems that moulting elephant seals are to blame.

University of California, Santa Cruz, set out to find a reason for unexplained increase in mercury levels in coastal water. There was no obvious reason behind this increase, but they did have a clue that the increase was seasonal.

Mercury is a toxin that hampers marine life when the levels increase. It has long been known that industrial waste brings mercury to marine environments and marine animals ingest it along with food. Methyl mercury is a more toxic form of the element and is readily absorbed by marine animals.

Over the course of time more and more of this toxic compound builds up inside bodies of marine animals and when they are eaten by their predators, the mercury is transferred up the food chain.

As the mercury moves up the food chain its levels get more and more concentrated, researchers reveal in the study. The levels increase to such an extent that mercury concentrations in top predators can be 1 million to 10 million times higher than the levels found in seawater.

There have been studies that have looked into biomagnification of mercury in the food chain, but this particular study goes a step further into analysing what happens next. Because mercury is an element, it doesn’t get destroyed, it just changes form.

Researchers found that the concentrations of methyl mercury in the seawater at AÃ±o Nuevo were twice as high during the breeding season and 17 times higher during the molting season. Elephant seals have this annual cycle wherein they undergo a “catastrophic moult” in which they shed the entire outer layer of skin and hair (“pelage”), which comes off in sheets onto the beach. Researchers analysed these outer layer of skin and hair and found that there were high concentrations of mercury the moulted pelage collected at AÃ±o Nuevo.

One of the possible sources – excreta of seals – was ruled out because elephant seals are fasting during most of their time on the beach. This indicated that the seasonality of the high methyl mercury levels at AÃ±o Nuevo was linked with moulted pelage.

The study has been published in Proceedings of the National Academy of Sciences (PNAS).