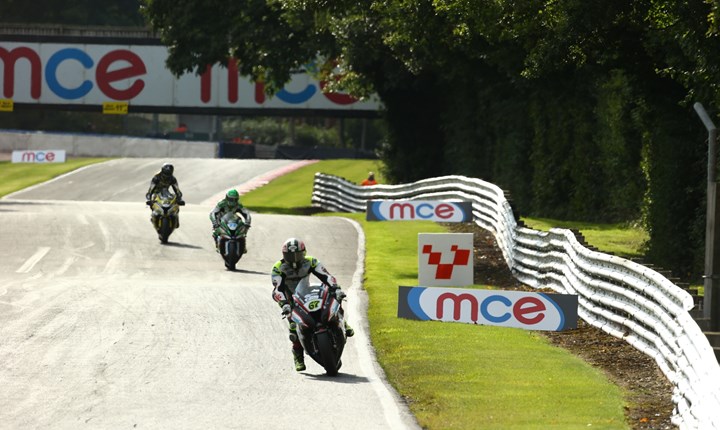 Byrne had grasped the advantage from the opening lap and had a pack of riders queuing up to try and snatch it away from him led by Tommy Bridewell with James Ellison and Danny Buchan in close contention.

Bridewell was pushing for the lead, but disaster struck the Tyco BMW rider on the seventh lap and as he closed on Byrne to try and make a move he was sidelined by a technical problem that forced him to retire. The Tyco BMW rider still holds fourth place in the overall standings despite his non-points score ahead of tomorrow’s Showdown deciding two races.

That left a returning Ellison and young gun Buchan to keep pushing for the final podium positions and the Be Wiser Kawasaki rider was looking for anyway to grab the second place away from the JG Speedfit Kawasaki rider but it wasn’t enough. Ellison held him off despite his best efforts to confirm his place in the Showdown six with Buchan celebrating his debut MCE BSB podium finish in third place.

Brookes had started 30th on the grid after his problem in Datatag Qualifying but the Milwaukee Yamaha delivered arguably one of his best performances to date, scything through the field to eventually score a fourth place finish with the podium contenders in his sights.

Dan Linfoot claimed fifth position after a race-long scrap with Luke Mossey as the pair both bid for the Showdown six. The Honda Racing rider narrowly had the edge by the final lap ahead of the rookie with Buildbase BMW locking out seventh and eighth with Richard Cooper and Lee Jackson respectively.