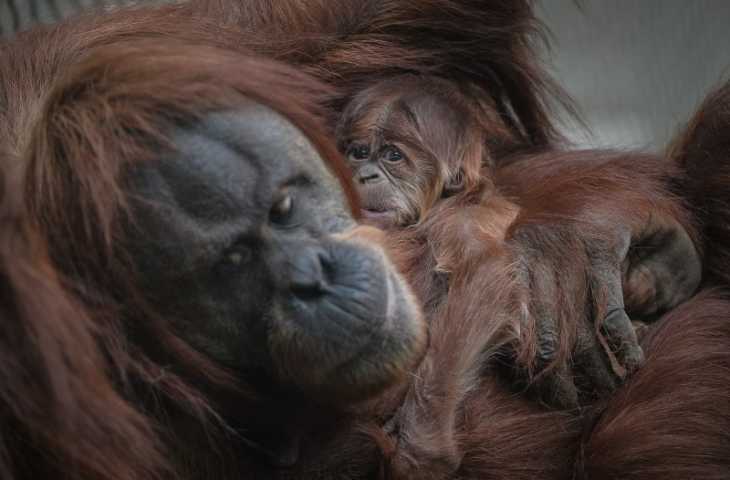 It’s time for celebrations at the Chester zoo as a critically endangered Sumatran orangutan named Subis has given birth in the early hours of September 4.

Subis, which has already been a mother four times earlier, gave birth to the yet unnamed young one after eight-and-a-half hour gestation. You can view Subis and her baby in the zooâs Realm of the Red Ape (RORA) exhibit, alongside other Sumatran orangutans Puluh, Emma, Indah, Tripa and Tuti who will all be moving into their brand new exhibit at the zooâs Â£40m Islands development later in the year.

The Sumatran orangutans have been classified as critically endangered by the International Union for the Conservation of Nature (IUCN) and are at an extremely high risk of extinction in the wild. According to Chester Zoo the birth of the tiny orangutan is a great achievement for the zoo and every new addition to the European Endangered Species Breeding Programme is vitally important.

Sumatran orangutans are found only on the island of Sumatra in Indonesia where itâs estimated that less than 6,500 remain. The species has come under threat due largely to the destruction of its habitat for logging, wholesale conversion of forest to palm oil plantations and hunting. Tim Rowlands, curator of mammals at the zoo, said: “It was a fabulous to come in and see a tiny pair of arms clinging to Subis. Sheâs an excellent, very experienced mum and we know sheâll do a brilliant job of caring for her new baby.”

“Subis herself was born here in 1986 and has since had four other young, but this is the first Sumatran orangutan to be born here at the zoo in just under three years, so the team is absolutely thrilled.”

Chester Zoo is also working with the species in the wild and its Realm of the Red Ape Conservation Programme is helping field workers in Sumatra to restore forests in which Sumatran orangutans live. As part of its Act for Wildlife programme, the zoo also supports the Sumatran Orangutan Conservation Project in Sumatra, which supports education work in schools close to areas where deforestation occurs and aims to teach children about the importance of preserving the biodiversity around them.

In October the zoo will launch its annual Go Orange for Orangutans â a campaign to help save the species in the wild.