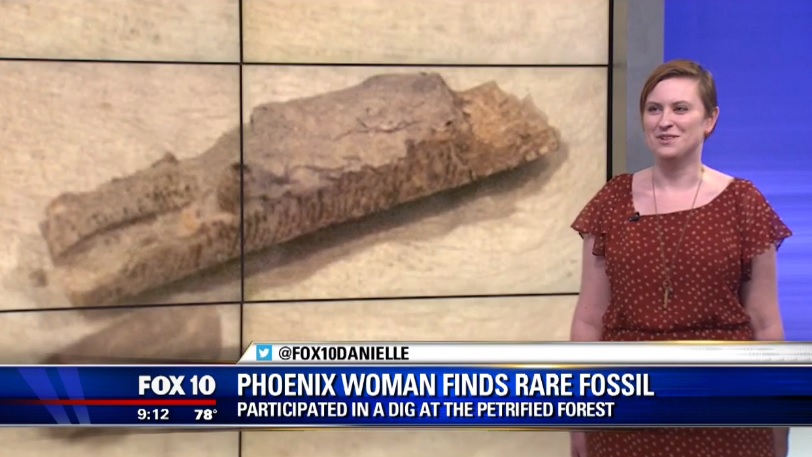 Amateur scientists and researchers are an important group of people in the scientific community as these are the people who at times stumble upon findings, which would have otherwise remain hidden for longer or may not get discovered at all.

One such amateur paleontologist is Stephanie Leco who recently stummbled upon a 220-million-year-old fossil of a fish jawbone. Leco made the finding during the first dig for citizens held last month at Arizonaâs Petrified Forest National Park. She found the fossil while she was sifting through loose dirt on a barren hillside.

The jawbone, which is as small as the size of a pinky fingernail, is that of a long-snouted fish that has been extinct for over 220 million years during the Late Triassic period. She wasn’t aware of what it was until she handed over the fossil to Matt Smith asking him what it was.

Not knowing what it was at the time, Smith who is park’s lead fossil preparer, wrapped the fossil up, placed it in tin and took it to the lab. Upon closer inspection with the microscope, experts reveal to Leco in an email that the fossil was a fish closely related to the genus Saurichthys.

“I wouldn’t expect to run into something like this ever again, I didn’t expect it the first time,” said Stephanie Leco quotes Fox 10.

The fossil is just part of the full jaw of the fish, which would have been about three to four times the size of the fossil discovered by Leco. According to park paleontologist Bill Parker, other fossils of the fish might also be found on the East Coast and on the Colorado Plateau where similar rock is exposed.

Ben Kligman, a senior at the University of California, Berkley, who has been studying the pond site is of the opinion that the fossil discovered by Leco could very well be of a new species, but they can’t say that for sure that they don’t have enough specimen in their possession.

“Anytime we can fill in gaps in the fossil record, it’s really important,” he said as quoted by Fox News. “People who don’t study Triassic fish may not be excited. The fact you can find new stuff is the real takeaway.”