Dione’s transit image captured by Cassini is rather eerie 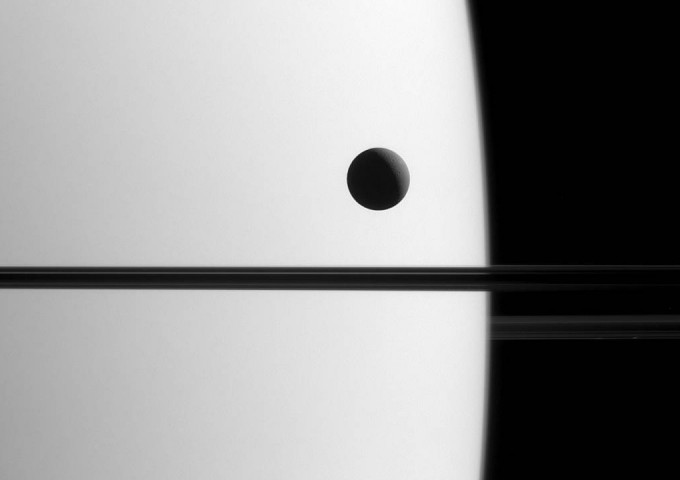 Cassini snapped a rather eerie image of Dione as it was transiting Saturn and though the image is not great as those captured by the spacecraft during itsÂ last flyby of Saturn’s moonÂ it is amazing nonetheless.

Cassini captured theÂ image of Dione from a distance of approximately 1.4 million miles (2.3 million kilometers) from Saturn and at a Sun-Saturn-spacecraft, or phase, angle of 119 degrees.

The new image, taken on May 21, provides an unilluminated view of the rings from about 0.3 degrees below the ring plane. Cassini used its narrow-angle camera to take the image in visible green light. Scientists are able to learn a great detail about a planet’s orbit as well as atmosphere when observed during a transit.

In an earlier image captured in April, the surface of Dione is seen as being full of some amazing features including linear features, called chasmata, which provide dramatic contrast to the round impact craters that typically cover moons.

During its latest flyby in June, Cassini came within 321 miles (516 kilometers) of the moonâs surface and post the flyby sent back some stunning images of Saturnâs natural satellite. Cassiniâs cameras and spectrometers observed terrain that includes âEurotas Chasmata,â a region first observed 35 years ago by NASAâs Voyager mission as bright, wispy streaks.

As per the plans Cassini would have tried to detect and determine the composition of any fine particles being emitted from Dione, which could indicate low-level geologic activity. The results havenât been revealed yet and it will be sometime before we get to see any.