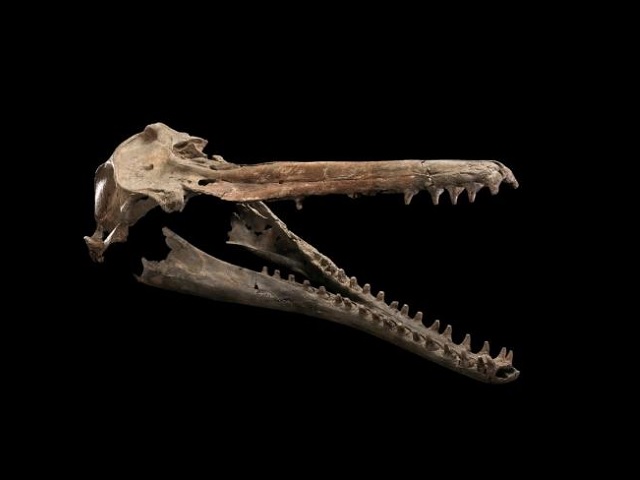 Careful examination of fossils found on the Caribbean coast near the town of PiÃ±a, Panama have led to the discovery of a new species of river dolphins which has been extinct for millions of years.

Discovered by Smithsonian researchers, the new species has been named Isthminia panamensis, the dolphin species sheds light on the evolution of today’s freshwater river dolphin species. The research is published in scientific journal Peerj.

The fossils studied by the scientists have been dated as 5.8-6.1 million years old. The fossil set includes half a skull, lower jaw with an almost entire set of conical teeth, right shoulder blade and two small bones from the dolphin’s flipper. Comparing the sizes of these fossils with those in the currently alive species of dolphins, researchers believe that the Isthminia would have been more than 9 feet in length.

Scientists from the Smithsonian’s National Museum of Natural History and the Smithsonian Tropical Research Institute collect the fossils of Isthminia panamensis, a new fossil dolphin, from the Caribbean coast of Panama on 18 June 2011. The fossil was then encased in a white plaster jacket, and recovered as the tide rushed in. Credit: Jorge Velez-Juarbe / Smithsonian Institution

Researchers behind the discovery have collaborated with Smithsonian’s Digitization Program Office to create a high resolution 3-D scan of the fossil. This allowed scientists to 3-D prints of the delicate specimen, whose bones are too fragile to be molded and casted by traditional approaches.

As of today, there are only four species of river dolphins that live in freshwater or coastal ecosystems. To the despair of the scientific community all these have been classified as endangered. One of the these species, the Chinese river dolphin, is believed to be extinct as well.

The fresh water dolphins show a range of adaptations to better navigate and hunt in the silty rivers including broad, paddle-like flippers, flexible necks and heads with particularly long, narrow snouts.

This is an artistic reconstruction of Isthminia panamensis, a new fossil dolphin from Panama, feeding on a flatfish. Many features of this new species appear similar to today’s ocean dolphins, yet the new fossil species is more closely related to the living Amazon River dolphin. The fossils of Isthminia panamensis were collected from marine rocks that date to a time (around 6 million years ago) before the Isthmus of Panama formed and a productive Central American Seaway connected the Atlantic and Pacific oceans. Credit: Julia Molnar / Smithsonian Institution

The new fossil was discovered in marine rocks and based on the analysis of the fossils, it is evident that the dolphin may be living in a marine habitat, like modern oceanic dolphins. The fossils of Isthminia enables researchers to peek at the marine ancestry of fresh water dolphins and helps them establish a clear boundary in geologic time for understanding when this lineage invaded Amazonia.

Aaron O’Dea, staff scientist at the Smithsonian Tropical Research Institute in Panama pegs the Isthminia as the closest relative of the living Amazon river dolphin.

Researchers say that while other marine animals like whales evolved from terrestrial ancestors to fully marine mammals, river dolphins represent a reverse movement by returning inland to freshwater ecosystems.

A 3-D print of the fossil is on permanent display at Panama’s BioMuseo–the original specimen will remain in the Smithsonian’s collection at the National Museum of Natural History. The public can also explore and download high resolution scans of the dolphin’s skull, jaw and shoulder blade at the Smithsonian X 3-D website 3D.SI.EDU.