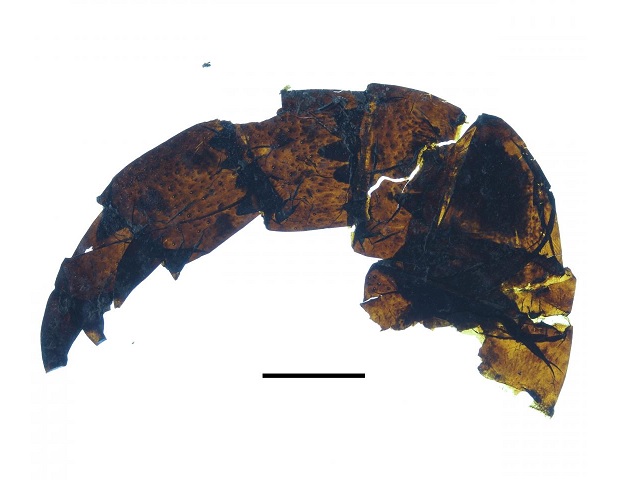 A new species of sea scorpion, which is believed to have lived some 460 million years ago, has been discovered from Iowa, USA.

The species has been named ‘Pentecopterus decorahensis’ after an ancient Greed warship named ‘penteconter’. The scorpion is believed to 1.5 meters long and is said to be the oldest known species of eurypterid (sea scorpion). Now extinct, these species are believed to be monster-like predators that swam the seas in ancient times are related to modern arachnids.

According to lead author, James Lamsdell from Yale University, USA, the shape of the new species of the sea scorpion is unique with legs shaped like a paddle, which allowed it to swim better, and a bigger head.

The condition in which the fossils were discovered is also particularly interesting. The fossils were compressed on the rock and scientists were able to peel it off and study it under a microscope.

The exoskeleton revealed great amounts of detail including the patterns of small hairs on the legs. “At times it seems like you are studying the shed skin of a modern animal – an incredibly exciting opportunity for any paleontologist”, added Lamsdell.

Researchers collected over 150 fossil fragments of the new species of scorpion. They excavated the fossils from the upper layer of the Winneshiek Shale in northeastern Iowa – a 27 meter thick sandy shale located within an ancient meteorite impact crater and mostly submerged by the Upper Iowa River.

Though it is believed that the scorpion could be, on average, 1.5 meters long, this particular fossil indicated that it had a total length of up to 1.7 meters, making Pentecopterus the largest known eurypterid from its era.

Based on the fossils, researchers were also able to interpret the function of certain body parts of the Pentecopterus. The rearmost limbs include a paddle with a large surface area, and joints that appear to be locked in place to reduce flex. This suggests that Pentecopterus used these paddles to either swim or dig.

The researchers have also been able to interpret the role of finer structures, including scales, follicles and setae (stiff bristles). Researchers found the rearmost limbs being covered in dense setae. This suggests that their function would have been to expand the surface area of the paddle during swimming. But the smaller follicle size in eurypterids suggests that the setae could have had a sensory function.

Spines are also present on some limbs and appear similar to those found on horseshoe crabs where they aid in processing food.

The findings have been published in open access journal BMC Evolutionary Biology.