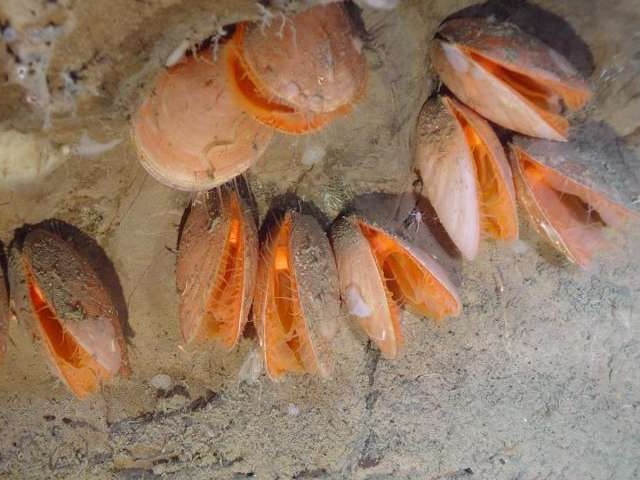 Researchers have finally named and described the new species of giant file clam which was originally collected from deep waters off Newfoundland 30 years ago.

Researchers with the Canadian Museum of Nature and Fisheries and Oceans Canada co-authored a paper published in the journal Zootaxa that describes this species of clams.

Initially believed to be European species, many more samples of the species have been collected off the Grand Banks and in a marine protected area “The Gully” about 220 km off the coast of Nova Scotia. Researchers carried out DNA analysis as well as comparative study of the clams and found that the species, which measures about 9 to 15 cm long, was in fact different from the their European counterparts and represented a new species.

This new species of clams is two to three times larger than a regular file clam. The new species has been named Acesta cryptadelphe, means “cryptic sibling”, which refers to the similarity in shape and structure to the previously described European giant file clam, Acesta excavata.

Citing the use of technology to retrieve clam samples and the collection of their DNA aboard the oceanographic ship CCGS Hudson, co-author Dr. Ellen Kenchington, a scientist with the Bedford Institute of Oceanography (BIO) in Dartmouth, Nova Scotia said that the story of the identification of this new species is also one of technology.

Scientists from BIO used ROPOSâan underwater vehicle with cameras and manipulator armsâ to find new specimens of the clam while operating in the deepwater canyons of the Gully Marine Protected Area.

“Using all this technology allowed us to photograph and collect intact specimens, and then to process the DNA while at sea. This gave us an early indication that we might have something special,” Kenchington said.” The Gully MPA continues to amaze us with new discoveries. It is an extraordinary place,” she added.

When Dr. Jean-Marc Gagnon, Curator of Invertebrates with the Canadian Museum of Nature in Ottawa, first discovered the clams in the 1980s, he recognized that they were unusual, with characteristics similar to scallops, but he put them aside to focus on other research. It was only years later at the museum that he began to look at them more closely.

Because of the limited number of samples, researchers initially thought that the clams were European giant clams, and likely represented new northerly records for this known species. However, more and more samples were collected in 2007 and 2010 following which researchers realised that the giant file clams collected in 1984 near Newfoundland may be a new species.

Along with other specimens uncovered by a Spanish research team off the Grand Banks, Gagnon was able to compare these new specimens to those of the six other known species of giant file clams. More than 150 clams were part of the study.

The results confirmed that shape and structure alone could not differentiate the northwest Atlantic species from the European and other known species. But the new DNA technology and genetic analysis provided by the Bedford Institute showed that the “cryptic” species was genetically distinct from the European giant file clam and is a new species, now known as Acesta cryptadelphe.

“Our persistence shows that there are still discoveries to be made from deep in our oceans, and both museum collections and genetic analysis are important resources to advance this knowledge, says Gagnon.”