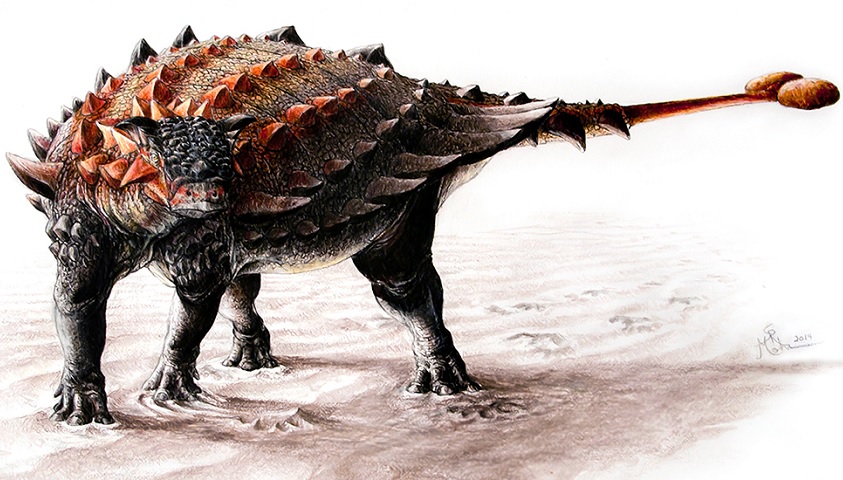 Researchers at University of Alberta have traced the evolution of ankylosaurs’ mace-like tail clubs revealing that the handle of the mace arrived first followed by the knot at the end of the tail.

Ankylosaurs typically have armoured bodies and flexible tail, but one particular group of these dinosaurs known as the ankylosaurids had also developed an armoured tail like a mace that can be used as a weapon. In a study published in Journal of Anatomy, researchers at U of A have detailed the tailâs evolution from being flexible to being fearsome weapon.

Ankylosaurs were common during the Jurassic period some 145 million years ago and ankylosaurids became widespread subsequently from the early and late Cretaceous period, researchers reveal.

According to University of Alberta PhD graduate Victoria Arbour, the know was pretty heavy and to ensure that it can support the knob and swing it when needed, ankylosaur required its tail to be stiff – something like the handle of an axe or a mace.

“For that to occur, the vertebrae along the tail had to become less flexible, otherwise the momentum generated by the knobâs weight could tear muscle or dislocate vertebrae”, said Arbour.

A timeline showing the steps in the evolution of ankylosaur tail clubs. Credit: Victoria Arbour

Arbour explains that the evolution of the tail may have happened in three possible ways. The first possibility is that the knob could have evolved first, in which case youâd see ankylosaurids with osteoderms enveloping the end of the tail, but with the tail remaining flexible.

Life illustration of Gobisaurus, an ankylosaur with the stiff tail but no knob of bone at the end. Credit: Sydney Mohr

The second possibility Arbour says is that the handle could have evolved first with early ankylosaurids having overlapping or fused tail vertebrae.

The third possibility is that both the handle like tail and the knob would have evolved in tandem, in which case one would see ankylosaurids with both structures, but there could have been other differences like shorter handles or smaller knobs.

During the study, Arbour found that during the early Cretaceous, ankylosaurs had begun to develop stiff tails with fused vertebrae. The knob appeared in the late Cretaceous.

âWhile itâs possible that some of the species could still have developed the handle and knob in tandem, it seems most likely that the tail stiffened prior to the growth of the osteoderm knob, in order to maximize the tailâs effectiveness as a weapon,â Arbour says.