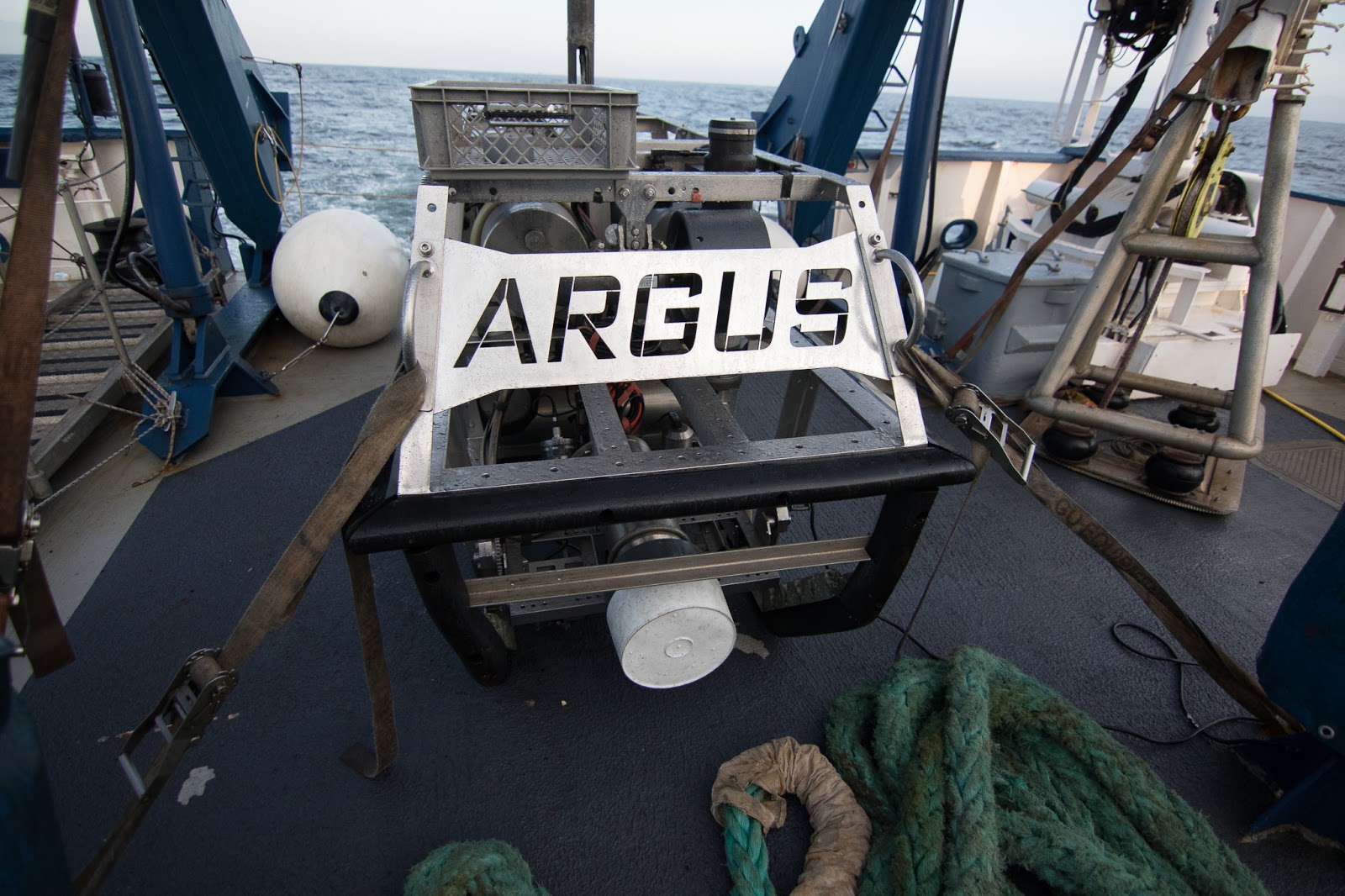 Starting August 25, Ocean Networks Canada embarked upon one of its most exciting expedition of the ocean bringing in two ships – exploration vessel (E/V) Nautilus and research vessel Thomas G. Thompson – both outfitted with robotic vehicles that provide realtime video streams of the ocean abyss to observers around the world.

In the first leg of the expedition from 25 August to 2 September, the OCN is using E/V Nautilus to service all the instrument platforms in the Salish Sea; installing a new 3D camera in Saanich Inlet; deploying pigs carcasses for forensic research in the Strait of Georgia; installing a new sensor system to measure underwater landslides on the Fraser Delta; and servicing moorings in the Strait of Juan de Fuca.

Out of these planned tasks, the ONC team has already redeployed a 3D camera system, built at the University of Alberta, in Saanich Inlet. The system comprises of 8 cameras and 3 projectors arranged in a circle, all of them oriented to focus on a common viewpoint with two PCâs for redundancy. Equipped with 5M pixel lenses the camera is designed to monitor the undersea habitat in a 3D continuous manner without manual intervention. This is very useful to researchers who study the behaviour of any living creature and its impact and interaction with its habitat. As far as we know, this system is the worlds first undersea 3D camera system that uses projectors.

The team at the University of Alberta has developed algorithms so the cameras can be automatically calibrated, creating an accurate 3D model. With an accurate 3D model computer vision algorithms such as object tracking and recognition can be developed and implemented. This system will provide data to a wide variety of researchers from a biologist who studies undersea habitat to a computer scientist performing 3D reconstruction for moving objects.

Activities on August 26 didn’t go as planned owing to the issues with ROV Hercules. Hours were spent rectifying the issues with the robotic vehicle after which the team decided that it was impractical to continue the repairs and troubleshooting efforts onboard the E/V Nautilus. A decision was made to cut short the dive plan by only recovering the digital still camera (which was in the original dive plan), return to the Institute of Ocean Sciences dock to transfer the instrument platform and camera to shore. During the recovery of the digital still camera, the Hercules tether became intertwined with the wire that was recovering the camera with its frame.

The expert operations led by the deck operations leader and conducted by the ROV team, navigator, deck crew, ONC team, and shipâs crew ensured that all was recovered safely and without damage.

Once all was secured on deck, the ship returned to the dock, offloaded the equipment, and returned to sea. By early evening, the ship had reached the sill of Saanich Inlet where the autonomous acoustic doppler current profiler and CTD with battery pack and data logger was deployed by winch and wire. Once this operation was completed, the ship continued underway to the east node in the Strait of Georgia to recover two instrument platforms for servicing.

The University of British Columbia (UBC) ship time saw the team collect cores for the study of sediments in low oxygen environments and this work was completed using Hercules collecting a series of pushcores at two different oxygen environments where microbial mats were present.

Ocean water samples at a few sites were collected using Niskin bottles on Hercules. The UBC team also used the ship time to search for a special incubator instrument that was lost last year when a mooring separated during recovery. Although a few sonar targets were found, none turned out to be the instrument.

The UBC team along with their samples and Ocean Networks Canadaâs instrument frames (that will not be re-installed) were off-loaded at the Institute of Ocean Scienceâs dock. Critical components of the forensic experiment (two recently deceased pigs), the Saanich Central node instrument platform, and ship supplies were loaded onboard and the ship sailed. The first site visited was the Central Saanich node site where the re-furbished instrument platform was lowered to the seafloor and connected to the VENUS Saanich cable.

In the early hours of 30 August Ocean Networks Canada installed Pig #17 and #18. Dead pigs are used as models for human decomposition so that we can understand what happens to a body in the ocean as it decays, and use this information to interpret patterns and rates of decomposition, as well as the marks left by scavengers, in human death investigations. Underwater cameras are used to study the decomposition of pig carcasses, lowered to the seafloor within both a protective cage and unprotected. Results reveal strong correlations between ocean chemistry conditions (e.g., ambient oxygen concentration) and macrofaunal scavenging (e.g., feeding by swarms of benthic amphipods) on rates of carcass degradation. This work is continuing, including the analysis of bone remains retrieved after months of in situ observations.

The ONC engineering team designed a platform that would deploy two carcasses at the same timeâwith one exposed and one protected by spaced barsâthatâs so sharks would not devour everything too quickly. The platform was also designed to collect the bones for subsequent study, when the platform was recovered.