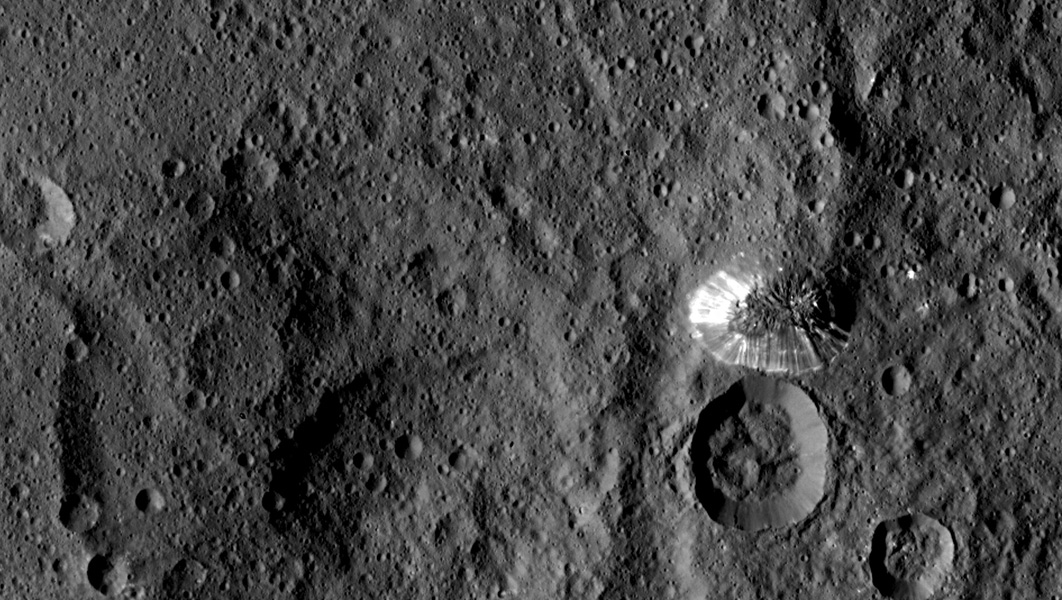 Do you remember that cone shaped mountain that was spotted on Ceres by Dawn spacecraft in June? Well the spacecraft has sent back some amazing close-up images of the conical mountain and according to NASA astronomers, the mountain stands 4 miles (6 kilometers) high.

The closest-yet view of Ceres sent by Dawn reveals a lot about the surface of the dwarf planet in greater clarity. The images have provided scientists with valuable information on crater formation features and narrow, braided fractures at some places on the surface.

Happy with Dawn’s performance Marc Rayman, Dawn’s chief engineer and mission director, said that the spacecraft is providing views of Ceres that are three times as sharp as in its previous mapping orbit and this has allowed them to take a deeper look at the surface features of the dwarf planet.

According to NASA, Dawn takes 11 days to capture and send back images of the entire surface of Ceres from its current orbital altitude of 915 miles (1,470 kilometers). Each 11-day cycle consists of 14 orbits. Over the next two months, the spacecraft will map the entirety of Ceres six times.

Up until August 28 11:00 PM PDT, the spacecraft has been using its framing camera to extensively map the surface and the series of images and data sent back to Earth are allowing mission scientists to create a 3D model of Ceres. Every image from this orbit has a resolution of 450 feet (140 meters) per pixel, and covers less than 1 percent of the surface of Ceres.

At the same time, Dawn’s visible and infrared mapping spectrometer is collecting data that will give scientists a better understanding of the minerals found on Ceres’ surface.

Engineers and scientists will also refine their measurements of Ceres’ gravity field, which will help mission planners in designing Dawn’s next orbit — its lowest — as well as the journey to get there. In late October, Dawn will begin spiraling toward this final orbit, which will be at an altitude of 230 miles (375 kilometers).

Dawn is the first mission to visit a dwarf planet, and the first to orbit two distinct solar system targets. It orbited protoplanet Vesta for 14 months in 2011 and 2012, and arrived at Ceres on March 6, 2015.

NASA revealed that Dawn will begin its second mapping cycle at this altitude around 11:00 PM PDT on August 28. Throughout the second mapping observations, it will point its camera a little back and to the left, rather than straight down, providing provide stereo views from which scientists can construct 3-D views of the alien terrain.