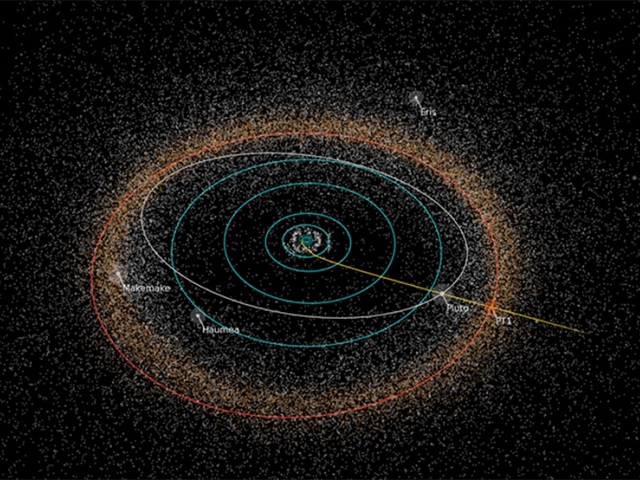 New Horizons may have a new target to approach if the proposal of such a Kuiper Belt object (KBO) flyby is accepted by NASA after formal review process.

The recommendation of a KBO flyby of ‘2014 MU69’ some 1 billion miles beyond Pluto has been put forward by New Horizons team and while the team is still looking into it, NASA says that this flyby won’t be as expensive as the primary mission for which New Horizons was launched.

New Horizons mission team identified two potential destinations for the spacecraft beyond Pluto and ‘2014 MU69’ is the one that has been recommended to NASA. Although NASA has selected 2014 MU69 as the target, as part of its normal review process the agency will conduct a detailed assessment before officially approving the mission extension to conduct additional science.

Missions that intend to continue exploring beyond their primary missions are required to submit a formal proposal and New Horizons is no different. The team must write a proposal to the agency to fund a KBO mission and once the proposal is submitted, which is due 2016, it will be evaluated by an independent team of experts before NASA can decide about the go-ahead.

Though the final decision will be made in 2016, an early detection and shortlisting of targets is important as the team needs to evaluate the spacecraft’s capability to reach its target given the fuel availability. New Horizons will perform a series of four maneuvers in late October and early November to set its course toward 2014 MU69 â nicknamed âPT1â (for âPotential Target 1â) â which it expects to reach on January 1, 2019. Any delays from those dates would cost precious fuel and add mission risk.

New Horizons Principal Investigator Alan Stern explains that ‘2014 MU69’ makes a great target owing to the fact that it is one of the ancient KBOs that was formed in the same orbit, which it is in currently. Further, this potential target will cost less fuel to reach than other candidate targets thereby leaving the spacecraft with more fuel allowing the team to make room for possible maneuvers that may be required due to some unforeseen situations.

According to the mission team, the spacecraft has been designed such that it can not only fulfill its primary goals, but also carry out ancillary science on other KBO. The spacecraft carries extra hydrazine fuel, and its communication systems have been designed such that they can operate well beyond Pluto. Further, its imaging and scientific instruments were designed to operate in light levels much lower than it will experience during KBO flyby.

The 2003 National Academy of Sciencesâ Planetary Decadal Survey (âNew Frontiers in the Solar Systemâ) strongly recommended that the first mission to the Kuiper Belt include flybys of Pluto and small KBOs, in order to sample the diversity of objects in that previously unexplored region of the solar system. The identification of PT1, which is in a completely different class of KBO than Pluto, potentially allows New Horizons to satisfy those goals.

But finding a suitable KBO flyby target was no easy task. Starting a search in 2011 using some of the largest ground-based telescopes on Earth, the New Horizons team found several dozen KBOs, but none were reachable within the fuel supply available aboard the spacecraft. The powerful Hubble Space Telescope came to the rescue in summer 2014, discovering five objects, since narrowed to two, within New Horizonsâ flight path. Scientists estimate that PT1 is just under 30 miles (about 45 kilometers) across; thatâs more than 10 times larger and 1,000 times more massive than typical comets, like the one the Rosetta mission is now orbiting, but only about 0.5 to 1 percent of the size (and about 1/10,000th the mass) of Pluto. As such, PT1 is thought to be like the building blocks of Kuiper Belt planets such as Pluto.

Unlike asteroids, KBOs have been heated only slightly by the Sun, and are thought to represent a well preserved, deep-freeze sample of what the outer solar system was like following its birth 4.6 billion years ago.

âThereâs so much that we can learn from close-up spacecraft observations that weâll never learn from Earth, as the Pluto flyby demonstrated so spectacularly,â said New Horizons science team member John Spencer, also of SwRI. âThe detailed images and other data that New Horizons could obtain from a KBO flyby will revolutionize our understanding of the Kuiper Belt and KBOs.â

The New Horizons spacecraft â currently 3 billion miles [4.9 billion kilometers] from Earth â is just starting to transmit the bulk of the images and other data, stored on its digital recorders, from its historic July encounter with the Pluto system. The spacecraft is healthy and operating normally.