London Zoo carries out its annual weigh-in of more than 17,000 animals 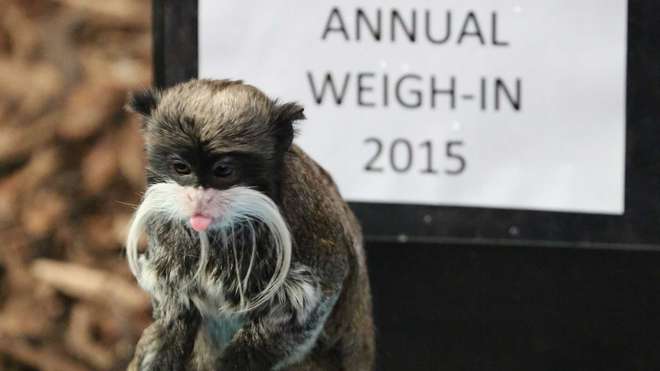 ZSL London Zoo has carried out its annual weigh-in measuring weights of over 17,000 animals – one of the means through which the zoo keeps track of the health of the animals.

Though zookeepers at the London Zoo keep a track of weights of all the animals on a regular basis, the annual weigh-in is an opportunity for them to make sure that the information they have been collecting through the year is up-to-date and accurate.

Each measurement is then recorded into the Zoological Information Management System (ZIMS), a database shared with zoos all around the world, helping zookeepers to compare important information on thousands of endangered species.

With different behaviours, personalities and traits to take into consideration, zookeepers use ingenious tactics to entice the animals in their care to stand up and be measured; getting penguins to walk over scales as they line up for their morning feed and training tortoises to clamber onto scales hidden in their grassy paddock. According to zoo officials, monkeys are one of the toughest when it comes to making them stay on the scale for accurate readings that their are highly mischievous and continue moving around constantly.

London Zoo press officer Rebecca Blanchard said monkeys are trickiest to weigh “because they just don’t stay still for very long. So you’ve got a fleeting second to get them on that scale, record their weight, before they run off and go and play with something else.”

In case of big cats like tigers, the zoo has built the weighing scales into the ground in the animals’ respective den. So as and when the cats enter or exit their dens, zookeepers are able to record their weights.

As well as a key gauge of the animalsâ general well-being, keepers can also use regular weight checks and waist measurements to identify pregnant animals, many of which are endangered species that are part of the Zooâs international conservation breeding programmes.