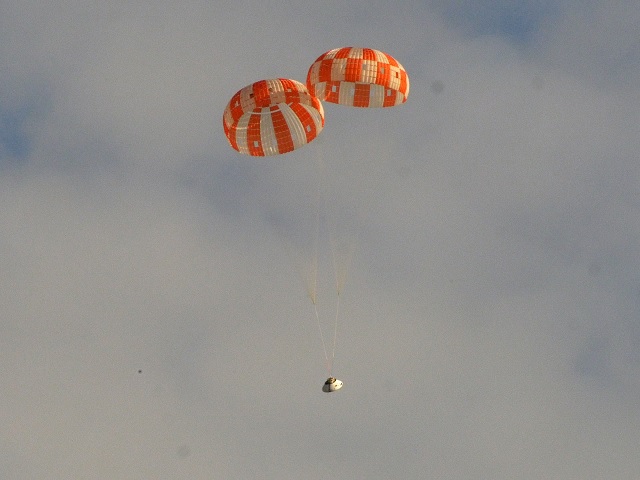 What if a manned space mission launch doesn’t go as planned and there astronauts are in danger? Launch abort systems are the answer and NASA is testing one now – the Orion spacecraftâs parachute system.

NASA is testing out Orion from the point of view of its ability to perform in the event of a partial deployment on re-entry. To test if the spacecraft is performing as intended, engineers intentionally failed two different parachutes used in the sequence that stabilizes and slows the spacecraft for landing after it was dropped from a C-17 aircraft.

The representative capsule was dropped from an altitude of 35,000 feet in the skies above the U.S. Army Yuma Proving Ground in Yuma, Arizona. The model has a mass similar to that of the Orion capsule being developed for deep space missions, and similar interfaces with its parachute system.

As part of the test, engineers also evaluated a change to the risers, which connect the parachutes to the vehicle from steel to a textile material as well as the use of lighter weight suspension lines for several of the parachutes. Both changes reduce overall mass and volume of the system.

Orionâs parachute system is a critical part of returning future crews who will travel to an asteroid, on toward Mars and return to Earth in the spacecraft. The first parachutes deploy when the crew module is traveling more than 300 mph, and in a matter of minutes, the entire parachute system enables it to touch down in the ocean at about 20 mph.

The actual system that will be used in manned missions composed of 11 parachutes that deploy in a precise sequence. Three parachutes pull off Orionâs forward bay cover, which protects the top of the crew module — where the packed parachutes reside — from the heat of reentry through Earthâs atmosphere.

Two drogues then deploy to slow the capsule and steady it. Three pilot parachutes then pull out the three orange and white mains, on which Orion rides for the final approximately 8,000 feet of its descent.

Orionâs main parachutes are densely packed and sit on the top part of the spacecraft. Once fully inflated, they could cover almost an entire football field.

During Orionâs flight test in space in 2014, the parachute system performed flawlessly, enabling the spacecraft to descend through the Earthâs atmosphere and splash down in the Pacific Ocean after traveling about 3,600 miles into space.

Wednesdayâs airdrop test was the penultimate evaluation as part of an engineering series before tests begin next year to qualify the parachute system for crewed flights. The qualification series will include eight airdrops over a three- year period that will put the final design through extreme conditions to ensure a safe return for the astronauts.