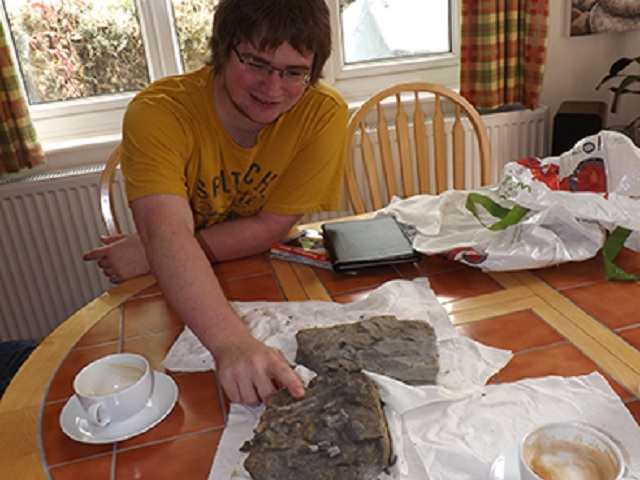 A student about to commence his third year at the University of Portsmouth has stumbled upon the missing foot fossil of previously discovered distant cousin of Tyrannosaurus rex.

Sam Davies, a student of Palaeontology at the University, accidentally discovered the fossil while he was on a field visit to Lavernock Beach, near Penarth, South Wales. Davies’ finding has been confirmed as being the missing foot belonging to the same theropod dinosaur â a distant cousin of Tyrannosaurus rex â whose skeleton was found by fossil-hunters following a cliff fall at the beach in spring 2014. A reconstruction of how the dinosaur could have looked.

The previous discovery was made by two brothers, Nick and Rob Hanigan, while they were looking for fossils along the Lavernock beach in the Vale of Glamorgan after storms in spring 2014. After a cliff fall on the beach, they spotted several loose blocks containing part of the skeleton of a small dinosaur. The fossilised bones were found spread across five slabs of rock and although some were preserved together in the correct position, others were scattered and separated by the actions of scavenging fish and sea-urchins. Davies found the missing foot, which was embedded in a 20cm piece of rock, because it was in his line of sight as he was walking along. He said that he wasn’t particularly looking for fossils of the dinosaur found by Hanigan brothers.

âIt was pure luck that I found it. It was just sitting on top of a slab of rock. It was obvious the fossil was fingers or toes, because there were three in a row but the first thing that came to mind was that it was some sort of plesiosaur”, Davies said.

Samâs tutor, Reader in Palaeobiology at the University of Portsmouth, Dr David Martill, confirmed immediately that it was the missing foot after Sam emailed him pictures of his find. Dr Martill added that they didn’t think that there will be any more remains of the theropod discovered earlier. “We didnât expect it to fall down again so soon”, he said. Sam Davies at the spot on Lavernock Beach, South Wales, where he made his dinosaur discovery.

âThis was a chance in a million find and highlights how important it is to encourage fossil-hunting in this country”, Dr Martill said.

Sam has donated the foot to National Museum Wales, where the rest of the dinosaur is on display until the end of the month.

âWeâre very grateful to Sam for donating the foot to the museum and hope to put it on display for our visitors to see very soonâ, said Dr Caroline Buttler, Head of Palaeontology at National Museum Wales. It is thought that the fossil was from a juvenile animal as some of its bones are not yet fully formed. Research is still underway, with a scientific paper in progress which will reveal the name of this new species.

The dinosaur â which has yet to be named â also probably had a fuzzy coat of simple proto-feathers, which would have been used for insulation and possibly display purposes. It may also have had simple quill-like structures for defence.

The rocks that contain the dinosaur fossil date back to a time immediately after the start of the Jurassic period, 201.3 million years ago. At that time, the dinosaurs were just starting to diversify and the Welsh specimen is almost certainly the earliest Jurassic dinosaur in the world. It is related to Coelophysis that lived approximately 203 to 196 million years ago in what is now the southwestern part of the United States of America.