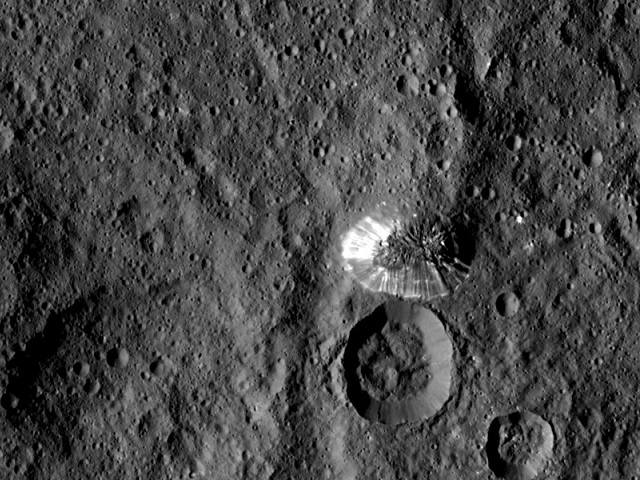 NASA’s Dawn spacecraft is delivering some of the most amazing images it captured from its new orbit around the dwarf planet Ceres showing off the surface features of the world in unprecedented detail.

Captured in the latest set of images are Ceres’ tall, conical mountain; crater formation features and narrow, braided fractures. The images have been captured after it entered its new orbit around Ceres at an altitude of 915 miles (1,470 kilometers).

NASA revealed that in its current orbit around Ceres, Dawn takes 11 days to capture and return images of the world’s whole surface. Each 11-day cycle consists of 14 orbits and over the next two months, the spacecraft will map the entirety of Ceres six times.

Using its framing camera, Dawn is extensively mapping the surface that will enable mission scientists to create a 3D model of the alien world. Every image from this orbit has a resolution of 450 feet (140 meters) per pixel, and covers less than 1 per cent of the surface of Ceres.

While the framing camera does its par, Dawn’s visible and infrared mapping spectrometer is collecting data that will give scientists a better understanding of the minerals found on Ceres’ surface.

Engineers and scientists will also refine their measurements of Ceres’ gravity field, which will help mission planners in designing Dawn’s next orbit — its lowest — as well as the journey to get there. In late October, Dawn will begin spiraling toward this final orbit, which will be at an altitude of 230 miles (375 kilometers). The image [embedded above] is that of the tall, conical mountain on Ceres that was spotted a few months ago. The latest image was taken from a distance of 915 miles (1,470 kilometers). The mountain, located in the southern hemisphere, stands 4 miles (6 kilometers) high. Its perimeter is sharply defined, with almost no accumulated debris at the base of the brightly streaked slope. The image was taken on August 19, 2015. The resolution of the image is 450 feet (140 meters) per pixel.

Dawn has delivered flawlessly until now with close up images of Ceres’ bright spots; colourful topographical map of Ceres; and some surface features of the alien world.