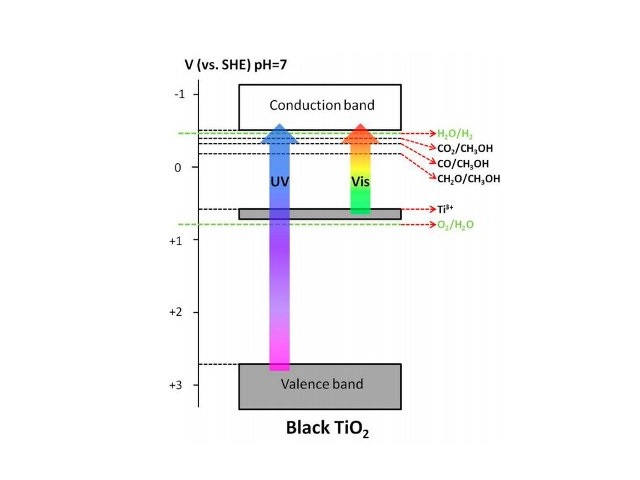 Researchers at Michigan Technological University have mimicked the process of photosynthesis to produce hydrogen fuel using water and light and that too with high efficiency.

In a study published in the Journal of Physical Chemistry, researchers Yun Hang Hu, the Charles and Carroll McArthur professor of Materials Science and Engineer, and his PhD student, Bing Han, at Michigan Tech have described their process.

In this new hydrogen production process, the key is the interactions of a catalyst, light and a sacrificial molecule.

Researchers liken the process to a complex sports game being played by black titanium dioxide, methanol and light to split water to produce hydrogen molecules. From the looks of it the process looks simple as production of hydrogen molecules involves moving an electron from one place to another, like kicking a football to get a field goal.

To make that score, a water molecule captures an electron excited within a material. When excited, electrons move up and down in different bands; the lower one here is the valence band and the higher one is the conduction band. The valence band and the conduction band are like goal posts, and between them is the band gap, which is like the playing field. The excited electron is the ball being passed around.

Solar energy, with both ultraviolet (UV) and visible light energy, is what gets this ball rolling. Light energy bounces off the first player, titanium dioxide, which is the material where the valence band and conduction band are in play. That excites an electron, making it a photo-excited charge that shoots up towards the conduction band. For UV light, the playing field is pretty big, and the band gap stretches 3.2 electron volts wide.

Hereâs where the game gets more complicated, Harry Potter Quidditch-style, with balls that move quickly on their own. Electrons tend to zip like a golden snitch, and they sometimes misbehave, scurrying back to their starting place in the valence band, which negates the goal score and H2 production.

The play between titanium dioxide, methanol and UV light serves up hydrogen (H2) molecules. However, UV is only a very small part (4 percent) of solar energy. It is important to use visible light, since it constitutes about 45 percent of solar energy. Huâs team has been able to increase the yield and energy efficiency up to two magnitudes greater than previously reported results using visible light instead of UV. But they had to change the playing field to do so.

âItâs a two-part process,â Hu says, explaining that the catalyst is black titanium dioxide (with 1 percent platinum), which attaches to a silicon dioxide substrate in their set-up. Huâs team first generated a âlight-diffuse-reflected surfaceâ for the silicon dioxide, making it bumpy, which traps light waves and bounces them around. âWe put the catalyst on the scattered surface, and it can increase the light absorption by one hundred times,â he explains.

Light absorption is an important step that generates photo-excited electrons, but itâs only part of whatâs needed. Using visible light shortens the playing field, altering the band gap to only 1.3 electron volts in black titanium oxide. Specifically, thatâs because an electron is excited to conduction band from Ti3+ energy level instead of the valence band, which is like starting at the 10-yard line instead of the 50-yard line.

The photo-excited electron has less distance to travel to the conduction band, but methanol doesnât like to play along. The shortened distance from methanol to Ti3+ energy level greatly reduces methanolâs oxidation reaction, giving it less motivation to fill the leftover hole in the Ti3+ energy level. So, it needed a little heat in the second step of the process to get that reaction going again.

âWe used temperature to increase the energy for methanol oxidation to donate electrons,â Hu says, adding that in the experiment they found 280 degrees Celsius to be the sweet spot.

With the modified silicon dioxide substrate and heat, Huâs team also had to design a different set-up for the experiment. The water they used was steam, pushed into a chamber where it collided with a disk of roughened silicon dioxide studded with black titanium dioxide-platinum catalyst. Visible light then excited the electrons, and the hydrogen could then be syphoned off.

Furthermore, this work created a hybrid process using both light and heat, which has opened a new door for visible light photosynthesis. The method is a big step closer to mimicking photosynthesis.