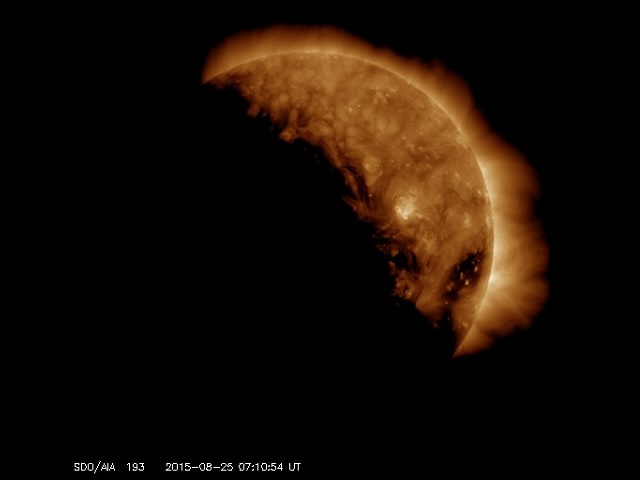 NASA’s Solar Dynamics Observatory has announced the beginning of its Fall 2015 eclipse season whereby starting today through to September 17, the Earth will pass between SDO and the Sun once each day.

The observatory orbits at about the longitude of Boulder, Colorado, and so the eclipse is at midnight solar time there. This corresponds to roughly 0700 UTC.

To mark the beginning of the the season, SDO has released an image of the first eclipse, right as per schedule at 0710 UTC (1:10 a.m. MDT).

That transit occurs near the end of that day’s eclipse and coincides with a solar eclipse in the far southern parts of the Earth.

Eclipse season is a result of our geosynchronous orbit. We don’t like missing the Sun for up to 72 minutes each day. But the constant contact with SDO allows the high speed data downlink we use to bring the Sun to everyone.

Eclipses happen near the solstices when the Sun, Earth, and SDO orbit come into alignment. They are a normal part of life with a geosynchronous observatory. Because SDO is in an inclined orbit the eclipse season is not centered on the solstice.