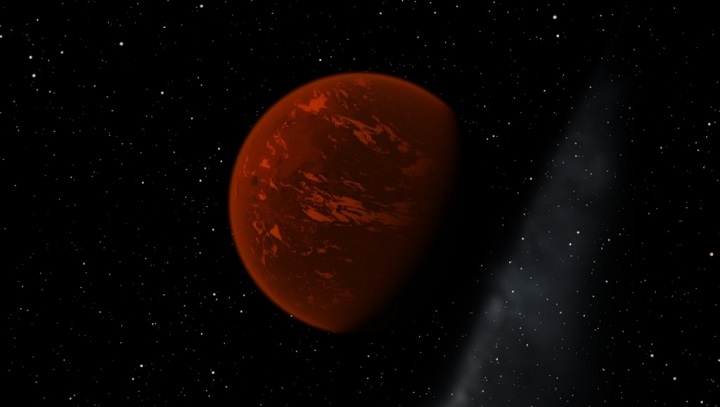 The beautiful ‘northern lights’-like aurora is not limited to the solar system – in fact it is not even limited to planets as astronomers have discovered the first aurora ever seen in an object beyond our Solar System and that too on a failed star aka brown dwarf.

The LSR J1835+3259 is a brown dwarf some 20 light away and when observed using both radio and optical telescopes, a team led by Gregg Hallinan, assistant professor of astronomy at Caltech, found that the failed stars are more-like supersized planets with planetary features such as powerful auroras near their magnetic poles.

According to researchers, the newly discovered aurora is 10,000 times more powerful than any previously seen. The discovery reveals a major difference between the magnetic activity of more-massive stars and that of brown dwarfs and planets, the scientists say.

“All the magnetic activity we see on this object can be explained by powerful auroras,” said Gregg Hallinan, of the California Institute of Technology (Caltech). “This indicates that auroral activity replaces solar-like coronal activity on brown dwarfs and smaller objects,” he added.

Astronomers observed LSR J1835+3259, using the Karl G. Jansky Very Large Array (VLA) at radio wavelengths, along with the 5-meter Hale Telescope on Palomar Mountain and the 10-meter Keck Telescope in Hawaii at optical wavelengths. The combination of radio and optical observations showed that the object, 18 light-years from Earth, has characteristics unlike any seen in more-massive stars.

“We’re finding that brown dwarfs are not like small stars in terms of their magnetic activity; they’re like giant planets with hugely powerful auroras,” says Hallinan. “If you were able to stand on the surface of the brown dwarf we observed–something you could never do because of its extremely hot temperatures and crushing surface gravity–you would sometimes be treated to a fantastic light show courtesy of auroras hundreds of thousands of times more powerful than any detected in our solar system.”

Brown dwarfs, sometimes called “failed stars,” are objects more massive than planets, yet too small to trigger the thermonuclear reactions at their cores that power stars. The astronomers said their observations of LSR J1835+3259 indicate that the coolest stars and brown dwarfs have outer atmospheres that support auroral activity, rather than the type of magnetic activity seen on more-massive and hotter stars.

The discovery also has implications for studying extrasolar planets. The aurora the scientists observed from LSR J1835+3259 appears powered by a little-understood dynamo process similar to that seen on larger planets in our Solar System. This process is different from that which causes the Earth’s auroral displays — the planet’s magnetic field interacting with the solar wind.

“What we see on this object appears to be the same phenomenon we’ve seen on Jupiter, for example, but thousands of times more powerful,” Hallinan said. “This suggests that it may be possible to detect this type of activity from extrasolar planets, many of which are significantly more massive than Jupiter,” he added.

In the early 2000s, astronomers observed that brown dwarfs emit radio waves and it was assumed that the failed stars were creating the radio waves in basically the same way that stars do–through the action of an extremely hot atmosphere, or corona, heated by magnetic activity near the object’s surface.

However, brown dwarfs do not generate large flares and charged-particle emissions in the way that our sun and other stars do, so the radio emissions were surprising. Artist’s impression of an auroral display on a brown dwarf.
Credit: Chuck Carter and Gregg Hallinan/Caltech

In 2006 Hallinan discovered that brown dwarfs can actually pulse at radio frequencies. “We see a similar pulsing phenomenon from planets in our solar system,” says Hallinan, “and that radio emission is actually due to auroras.” Since then he has wondered if the radio emissions seen on brown dwarfs might be caused by auroras.

Following his hunch, Hallinan and his colleagues conducted an extensive observation campaign of the brown dwarf LSRJ 1835+3259, using the National Radio Astronomy Observatory’s Very Large Array (VLA) and detected a bright pulse of radio waves that appeared as the brown dwarf rotated around. The object rotates every 2.84 hours, so the researchers were able to watch nearly three full rotations over the course of a single night.

Next, the astronomers used the Hale Telescope to observe that the brown dwarf varied optically on the same period as the radio pulses. Focusing on one of the spectral lines associated with excited hydrogen–the h-alpha emission line–they found that the object’s brightness varied periodically.

Then astronomers used the Keck telescopes to measure precisely the brightness of the brown dwarf over time–no simple feat given that these objects are many thousands of times fainter than our own sun. Hallinan and his team were able to establish that this hydrogen emission is a signature of auroras near the surface of the brown dwarf.

“As the electrons spiral down toward the atmosphere, they produce radio emissions, and then when they hit the atmosphere, they excite hydrogen in a process that occurs at Earth and other planets, albeit tens of thousands of times more intense,” explains Hallinan. “We now know that this kind of auroral behavior is extending all the way from planets up to brown dwarfs.”

In the case of brown dwarfs, charged particles cannot be driven into their magnetosphere by a stellar wind, as there is no stellar wind to do so. Hallinan says that some other source, such as an orbiting planet moving through the brown dwarf’s magnetosphere, may be generating a current and producing the auroras. “But until we map the aurora accurately, we won’t be able to say where it’s coming from,” he says.

He notes that brown dwarfs offer a convenient stepping stone to studying exoplanets, planets orbiting stars other than our own sun. “For the coolest brown dwarfs we’ve discovered, their atmosphere is pretty similar to what we would expect for many exoplanets, and you can actually look at a brown dwarf and study its atmosphere without having a star nearby that’s a factor of a million times brighter obscuring your observations,” says Hallinan.

Just as he has used measurements of radio waves to determine the strength of magnetic fields around brown dwarfs, he hopes to use the low-frequency radio observations of the newly built Owens Valley Long Wavelength Array to measure the magnetic fields of exoplanets.

“That could be particularly interesting because whether or not a planet has a magnetic field may be an important factor in habitability,” he says. “I’m trying to build a picture of magnetic field strength and topology and the role that magnetic fields play as we go from stars to brown dwarfs and eventually right down into the planetary regime.”