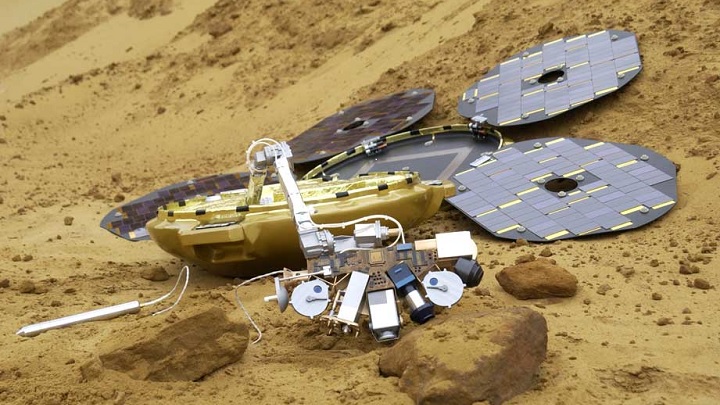 The Beagle 2 team has been awarded the prestigious 2015 Sir Arthur Clarke Award for Industry/Project Team at the UK Space Conference in Liverpool.

The lander disappeared shortly after its attempt of a Christmas Day landing on Mars in 2003. Despite this, the project team kept going and after about 11 years, the flower-shaped Beagle 2 was eventually spotted in January 2015 from images obtained by the HiRISE camera on Nasaâs Mars Reconnaissance Orbiter. From the looks of it the lander is in a partially deployed state and mission manager speculates that the lander may still be holding data it may have managed to capture during its descent and possible on-surface operations.

The Sir Arthur Clarke Awards recognise and reward those individuals and teams that have made notable or outstanding achievements in, or contributions to, all space activities. Better known as âThe Arthursâ, they have been presented annually since 2005.

âThis mission was only one, or possibly two solar panels away from being an outstanding success,â said the award announcement.

The HiRISE images from Mars Orbiter confirm that Beagle 2 managed to land successfully and started to deploy its solar panels; however, because of unknown reasons, only two or perhaps three of the four panels opened thus preventing the probe from communicating with Earth.

The discovery of the lander also proved that the heat-protecting shield, parachutes as well as landing air-bags and software worked as designed.

The award was received by Professor Mark Sims, formerly Beagle 2 Mission Manager and from University of Leicester’s Department of Physics and Astronomy and Dr Jim Clemmet, former Beagle 2 Chief Engineer, of Airbus Space and Defence. on behalf of the whole Beagle 2 team

“It was a great pleasure to accept the award with Jim Clemmet on behalf of the whole Beagle 2 team”, said Prof Sims. “It is a great pity that Colin Pillinger who lead the Beagle 2 project, George Fraser and Dave Barnes who all sadly passed last year are not here to see the award which recognises the extraordinary efforts made by the whole team, industry and academia to design, build, test and deliver Beagle 2 to the surface of Mars.”