YIFY-Torrrents unblocked in the UK; thanks to CloudFlare, GeoDNS 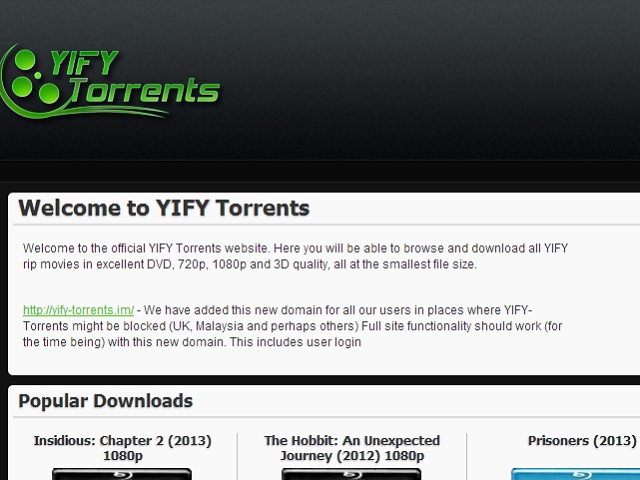 YIFY-Torrents has been reportedly unblocked in the UK for users of at least two ISPs thanks to the brilliant work by the networking experts over at YIFY.

As of this writing YIFY-Torrents has been unblocked for users of Sky and TalkTalk claims the guys over at YIFY. YIFY was blocked alongside ProjectFreeTV and PrimeWire by all major ISPs on November 22 following orders from UK High Court on copyright infringement and piracy related charges. User have been trying out all sorts of methods to bypass ISP blockades including paid VPN services, reverse proxy, web proxies, anti-censorship tools among others in a bid to access the torrent site.

However, starting today the blocked site is again accessible across the UK without the use of any tools. While speaking with TorrentFreak YIFY revealed that they carried out a little researching on how the ISPs were implementing the blocks. Having designed a small application and with help from a few users from the UK, YIFY found that the ISPs were actually blocking traffic on IPs associated with the torrent site.

âAfter all the testing we came to the conclusion that Sky (and others) regularly pull IPs listed on our DNS servers and add them to their block list. This block list is then used by an advanced proxy system that redirects any requests to the blacklisted IPs to a webserver that the ISP owns and returns a stock âblocked pageâ message,â YIFY told TorrentFreak.

YIFY revealed that there was nothing to do with the domain name takedown here and YIFY could have kept on adding new IP addresses behind yify-torrents.com up until an IP level block was implemented and then move onto new IP addresses. However, they were looking for a permanent solution and thatâs where CloudFlare and GeoDNS came in.

YIFY explains that CloudFlare is one of the best CDNs out there and that the caching services work such that the static content is loaded from CloudFlare servers rather than the actual or original servers. Blocking of CloudFlare IP addresses isnât a viable option considering the security service offers protection to over a million websites and implementing blocks on CloudFlare would basically mean that a major chunk of the Internet would be affected.

However, YIFY explained that the torrent site isnât completely dependent on CloudFlare. YIFY-Torrents uses another service called GeoDNS that allows it to hand out different IP addresses to users depending upon the location from which they are trying to access the site. UK visitors will be provided with CloudFlare IPs while the users from rest of the world will be handed out IPs from the original network.