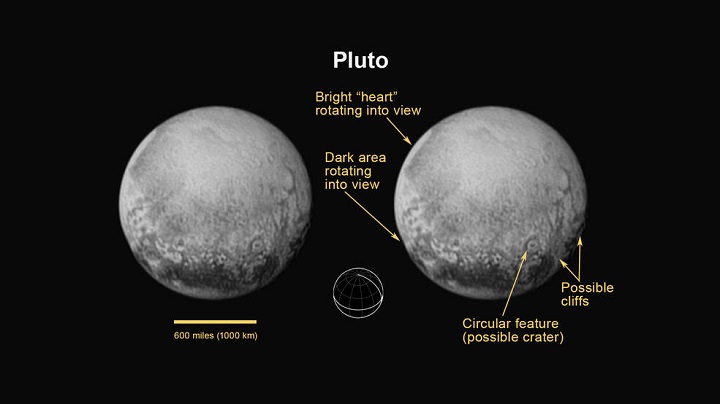 The New Horizons project team at NASA has revealed that their spacecraft is doing great as it approaches the icy dwarf planet Pluto for the historic flyby on July 14.

New Horizons is now less than one million miles away from Pluto. The spacecraft is flying at 30,800 miles per hour (49,600 kilometers per hour) and there is no way it can come to a standstill and that will leave it with no option but to just zoom past the dwarf planet. During this closest encounter, it will autonomously conduct the pre-programmed science experiments using its seven science instruments. The mission will complete the initial reconnaissance of the solar system with the first-ever look at the icy dwarf planet, NASA said.

New Horizons is constantly sending out data to Earth and mission control is processing selected pictures for public release. With every set of new images, the surfaces of Pluto and Charon are getting clearer with surface features that have never been observed on the duo ever.

The latest set of images [below] sent across by New Horizons are those of Charon indicating that Pluto’s largest moon is a world of chasms and craters. The most pronounced chasm, which lies in the southern hemisphere, is longer and miles deeper than Earthâs Grand Canyon, according to William McKinnon, deputy lead scientist with New Horizonâs Geology and Geophysics investigation team. A mysterious dark region near Charonâs north pole stretches for 200 miles. More detailed images that New Horizons will take around the time of closest approach to the moon on July 14 may provide hints about the dark regionâs origin.

The mission control team during a briefing said that New Horizons’ last batch of pre-flyby data will be downlinked on Monday and that will include a 600-pixel-wide, full-frame image of Pluto itself.

The probe will then go radio silent as it makes its closest contact on July 14 03:17 GMT (04:17 BST; 23:17 EDT Monday). During the time of its closest approach, it will be at a distance of less than 12,500km of the surface of Pluto and because it will be busy carrying out the scientific observations, it won’t be talking to Earth.

The pre-fed instructions will see the spacecraft carry out hundreds of movements for the automated observation sequence. During this time it will not only observe Pluto and Charon, but also concentrate at the lesser moons in the system: Styx, Nix, Kerberos and Hydra, the mission control team said during the briefing.

During this time, the team will be waiting eagerly for a signal from New Horizons confirming that the flyby was completed without incident. This particular signal will come in the form of regular telemetry data about the status of the probe. Though the signal will be a simple one, it will indicate that the 9-year-wait has been worth it and that all the observations were conducted as they should have been.