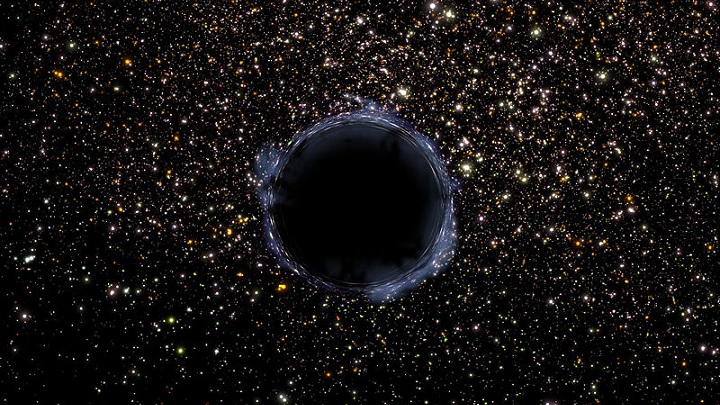 Astronomers have discovered what they classify as a ginormous black hole in the early universe – just two billion years after the big bang – in a galaxy that is of normal size. Researchers have also revealed that the uniqueness about the find is that the black hole has outgrew its host galaxy. The Astronomers said that their survey was designed to observe the average objects, not the exotic ones and they were targeting moderate black holes that inhabit typical galaxies today.

“It was quite a shock to see such a ginormous black hole in such a deep field”, said C. Megan Urry, Yale’s Israel Munson Professor of Astrophysics and co-author of a study about the phenomenon in the journal Science.

Deep-field surveys are intended to look at faint galaxies; they point at small areas of the sky for a longer period of time, meaning the total volume of space being sampled is relatively small.

However, it was the mass of the surrounding galaxy that most surprised the research team. “The measurements correspond to the mass of a typical galaxy,” said lead author Benny Trakhtenbrot, a researcher at ETH Zurich’s Institute for Astronomy. “We therefore have a gigantic black hole within a normal-size galaxy.”

Stars were still forming in CID-947, the researchers said, and the galaxy could continue to grow. They said CID-947 could be a precursor of the most extreme, massive systems observed in today’s local universe, such as the galaxy NGC 1277 in the Perseus constellation, 220 million light years from the Milky Way. But if so, they said, the growth of the black hole still greatly anticipated the growth of the surrounding galaxy, contrary to what astronomers thought previously.

Urry and her colleagues credited the W.M. Keck Observatory in Hawaii and the Chandra COSMOS legacy survey in aiding the team’s work. “The sensitivity and versatility of Keck’s new infrared spectrometer, MOSFIRE, was critical to this discovery,” Urry said.