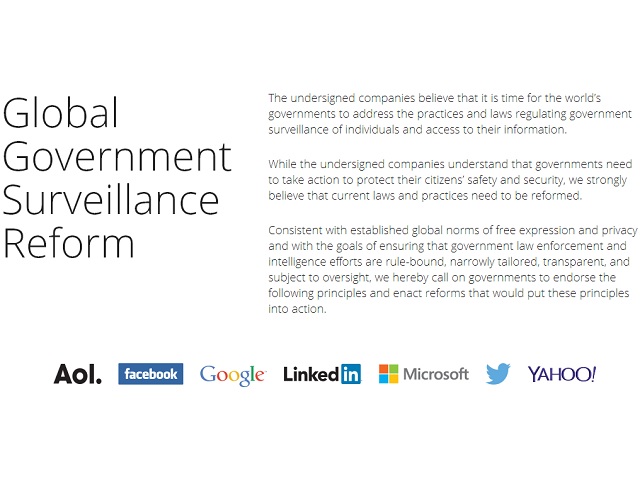 Technology giants including Microsoft, Facebook, Google, LinkedIn, Twitter, Apple, AOL and Yahoo have come together and issued an open letter to US President Barack Obama and the Congress to bring in reforms and restrictions on the government surveillance activities.

The technology companies have highlighted their concerns over the extent of surveillance being carried out and at times through ways wherein there was very little or no court oversight at all. The letter was published in many leading newspapers in the US. The technology giants have asked cessation of the collection of user information including email addresses, address books, video chats and enactment and enforcement of new restrictions over government surveillance.

âWe urge the US to take the lead and make reforms that ensure that government surveillance efforts are clearly restricted by law, proportionate to the risks, transparent and subject to independent oversightâ, read the letter.

Microsoft, Yahoo, and Twitter have already outlined their plans of implementing stronger encryption to thwart government surveillance. Microsoft will be taking a three-fold action involving encryption across all its services, reinforced legal protection of customer data and enhanced transparency of its software code.

Yahooâs CEO Marissa Mayer revealed earlier that the company will extend encryption to all its services by early 2014. Yahooâs efforts wonât be limited to the services being offered by the company as Mayer has said that it will be working with its international mail partners to ensure that Yahoo co-branded Mail accounts also offer the same security.