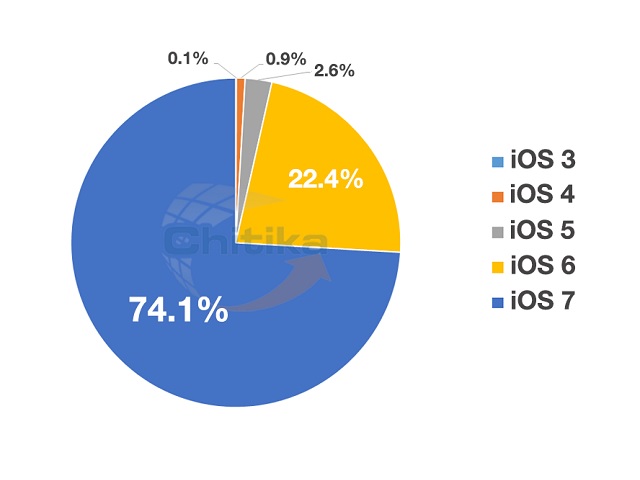 A new research has revealed that Appleâs iOS 7 now powers a whopping 74 percent of iDevices.

Chitika, the advertising company, which carried out the research revealed through a report that nearly 75 percent of iPhones have iOS 7 installed on them while 65 percent of iPads are now running latest iOS version. The report also claims that 22 percent of devices are still on iOS 6 and the remaining are running older versions of iOS.

If the install figures by Chitika are true, it means that iOS 7 has by far the fastest adoption rate compared to its predecessor and as the advertising company notes the fast adoption rate acts âas a distinctive selling point when it comes to attracting application and mobile Web developers to the platform.â

When iOS 6 was released, it reached an adoption level of over 90 percent and considering the speed at which the iOS 7 is being installed on iDevices, it will reach the 90 percent share milestone faster than its predecessor. iOS 6 had an adoption rate of 83 percent during the first six months after its release in September 2012.

âWhile still-active legacy devices make it unlikely for iOS 7 adoption to substantially surpass the nearly 90% adoption rate of iOS 6, the latest operating system will likely reach that point in a much quicker timeframe than its forerunnerâ, reads the report.