Hotfile shuts down for good 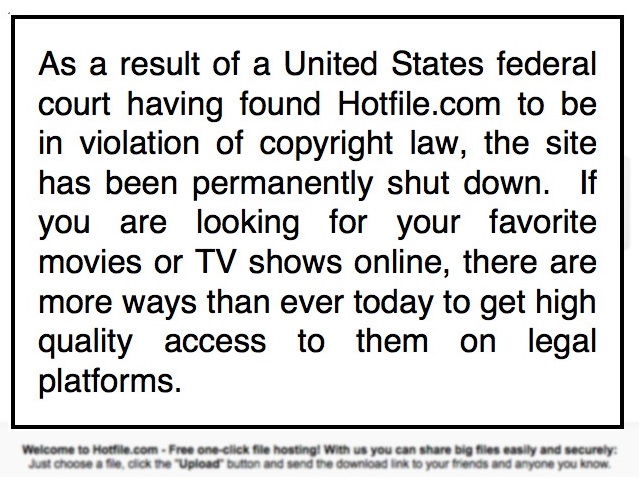 Hotfile has permanently shut down for good without any prior warning just hours after $80 million settlement with the MPAA.

The decision is rather drastic considering that the digital locker isnât providing any chance or way to its countless users of getting their files back. There have been instances wherein users have been using the file sharing service for legitimate uses like storing personal and business documents.

If you visit Hotfile.com, there is a message that reads: âAs a result of a United States Federal Court having found Hotfile.com to be in violation of copyright law the site has been permanently shut down. If you are looking for your favorite movies or TV-shows online, there are more ways than ever today to get high quality access to them on legal platforms.â

The file sharing site hasnât posted any explanation or comment on its highly controversial move, which not only casts a doubt on the intentions of its admins, but also taints other cloud hosting providers.

It is not officially known how many users were registered with Hotfile and how many among them were paying users, but it is expected that the tally may run into tens of thousands if not millions.

After Megaupload in early 2012 and IsoHunt this year, the closure of Hotfile is the third major blow to cloud storage service providers.