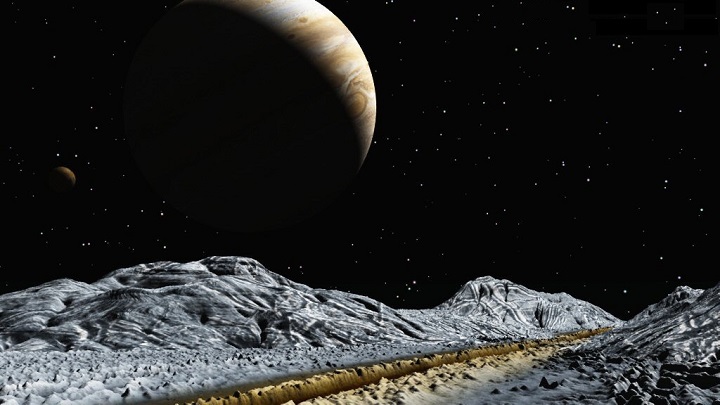 NASA’s quest to find signs of life beyond Earth has received a major boost as its Europa mission has moved from concept review to development.

Beyond Earth, Jupiter’s moon Europa is considered one of the most promising places in the solar system to search for signs of present-day life. NASA’s mission concept — to conduct a detailed survey of Europa and investigate its habitability — has successfully completed its first major review by the agency and now is entering the development phase known as formulation.

John Grunsfeld, associate administrator for NASA’s Science Mission Directorate in Washington says that they space agency is taking an exciting step from concept to mission and the time has come to seek answers and confirm findings made during the late 1990s by the Galileo mission.

NASA’s Galileo Mission to Jupiter in the late 1990s produced strong evidence that Europa, about the size of Earth’s moon, has an ocean beneath its frozen crust. If proven to exist, this global ocean could hold more than twice as much water as Earth. With abundant salt water, a rocky sea floor, and the energy and chemistry provided by tidal heating, Europa may have the ingredients needed to support simple organisms.

The mission plan calls for a spacecraft to be launched to Jupiter in the 2020s, arriving in the distant planet’s orbit after a journey of several years. The spacecraft would orbit the giant planet about every two weeks, providing many opportunities for close flybys of Europa. The mission plan includes 45 flybys, during which the spacecraft would image the moon’s icy surface at high resolution and investigate its composition and the structure of its interior and icy shell.

NASA’s Jet Propulsion Laboratory in Pasadena, California, has been assigned the responsibility of managing the project. JPL has been studying the multiple-flyby mission concept, in collaboration with the Johns Hopkins University Applied Physics Laboratory (APL) in Laurel, Maryland, since 2011.

Instruments selected for the Europa mission’s scientific payload were announced on May 26. Institutions supplying instruments include APL; JPL; Arizona State University, Tempe; the University of Texas at Austin; Southwest Research Institute, San Antonio; and the University of Colorado, Boulder.

“It’s a great day for science,” said Joan Salute, Europa program executive at NASA Headquarters in Washington. “We are thrilled to pass the first major milestone in the lifecycle of a mission that will ultimately inform us on the habitability of Europa.”