Check out this pyramid-like structure on Ceres 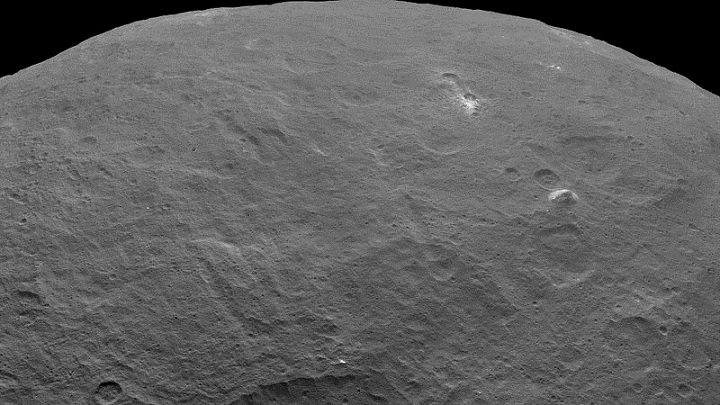 NASA’s Dawn has been sending ever so clear images of dwarf planet Ceres and in one of the images sent his month taken from 4,400 kilometers above surface, one can clearly see this strange ‘pyramid’ like structure.

Ceres was all the rage among astronomers and scientists because of its mysterious bright white spots, but it seems that this pyramid like cone structure has intrigued researchers equally.

The image was taken by Dawn during its second mapping orbit around Ceres. If we go by the mathematics of the image, the pixels in this image are 140 metres on a side. Going by that scale, this “pyramid” like structure is a whopping 18 kilometres across!

Further, if we put in some basic mathematics of angle and distance of the peak from the left corner – about two thirds of the way across the base – we get the height of this pyramid as somewhere between 6000-8000 metres. This is way too high if we compare it with the Pyramid of Giza as its height is just 139-metres.

There is no information from NASA as to what this structure might be, but from the looks of it, it is more like a cone structure and not a pyramid.

As Dawn closes in on Ceres, we are expecting more and more images of the dwarf planet as well as its bright spots and hopefull this pyramid-like structure.