US police department gives in on Cryptolocker ransom demand; shells out Â£470 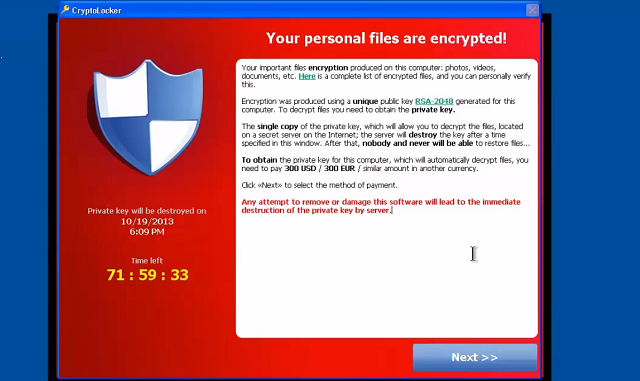 Swansea Massachusetts police department, in a bid to get back all the data locked away by the Cryptolocker, shelled out $750 to buy two bitcoins and pay the ransom demand by criminals.

According to a report on The Herald News, several âseveral images and word documents,â were locked by Cryptolocker. The department followed the instructions provided by cybercriminals and bought two bitcoins on November 10 worth Â£470 and sent them to the demanded address. Once the cybercriminals received the two BTC, they sent out the unlock codes.

â[The Trojan] is so complicated and successful that you have to buy these Bitcoins, which we had never heard of,â Swansea Police Lt. Gregory Ryan said in a statement to the press.

The department hasnât provided the specifics of the files that they were desperate to unlock, but said that âIt was an education for (those who) had to deal with itâ and that the malware didnât damage the system used by department to book official reports and logging photographs.

Just last week newly formed National Cyber Crime Unit of the UK sent out an alert warning that millions of Britons are at the receiving end of a huge ransomware spam attack appearing to be from banks and financial institutions. The NCA said that the attack was a significant risk considering that it was targeting millions of Brits specifically UK SMBs.

Let us know in the comments section if you or anyone you know have been affected by Cryptolocker.