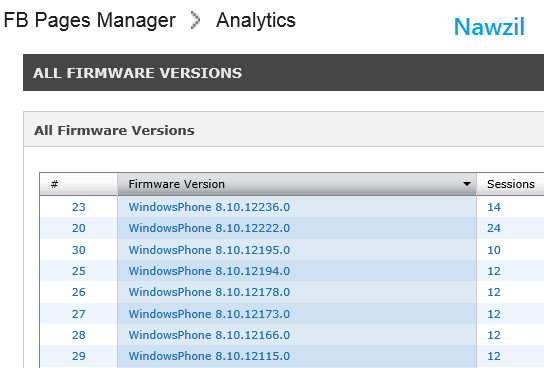 Reports of existence of Windows Phone 8.1 have been floating for a while now, but latest evidence indicates that the Windows Phone 8 successor is being internally tested at Microsoft and Nokia.

Windows powered tablets, desktops and other portable devices have already started receiving Windows 8.1 update, but smartphones have only received a GDR3 update that enables new hardware setups rather than bringing in any new features.

A tweet from Nawzil claims that Microsoft and Nokia running FB Pages Manager â an app that allows users to manage their Facebook profiles while on the move. The interesting bit here is there are multiple builds for Windows Phone 8.1 that are being tested.

Nawzil claims that the app has been downloaded for more than 80,000 times with as many as 30,000 monthly active users.

We expect Microsoft to announce Windows Phone 8.1 sometime in the first or second quarter of 2014 alongside some new smartphones from different partners. The 2013 end testing makes perfect sense for something that has to be released in early 2014.

We donât have much information or knowledge about the looks of the new Windows Phone 8.1, but there have been reports that there will be features such as âCortanaâ voice assistant, new Notification Center, actionable-notifications, app-list sorting among others.