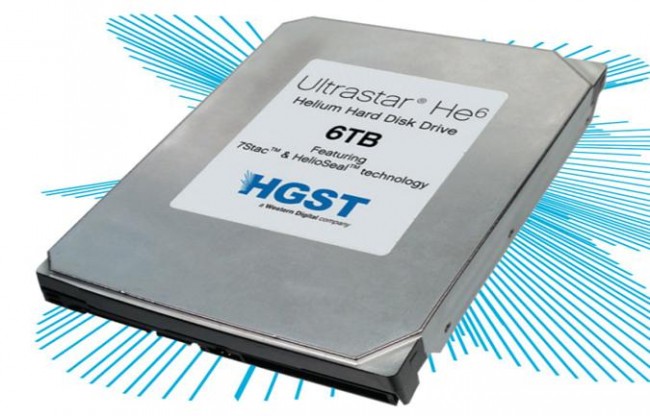 HGSTâs hard work and efforts have finally paid off in the form of Ultrastar He6 â a helium filled 6TB hard drive â that helps data center TCO improve on capacity, power, cooling and storage densities.

Helium has one-seventh the density of normal air and because of that HGST is able to pack more platters the in the same 3.5-inch form factor thereby increase storage capacities. Further, because of lesser density, there is less friction and less turbulence caused by the spinning disks and read-write heads.

Lower friction and less turbulence allows hard drives to operate at lower power and that too at increased efficiency, which keeping the heat output down. According to HGST, the Ultrastar He6 consumes 23% less power when in idle state and operates 4-5Â°C cooler.

One of the benefits is increased capacity wherein a four-platter drive can be equipped with up to seven platters increasing the capacity by three-quarters. This means a 4TB CinemaStar drive with four platters, in theory, can become a 7TB helium drive with seven platters.

Helium tends to leak through regular seals used in air-filled HDDs because of which HGST had to develop a new technology to stop the gas from leaking. âThrough HGSTâs innovative and patented HelioSeal process, the Ultrastar He6 drive is the industryâs first hermetically sealed helium-filled HDD that can be cost-effectively manufactured in high volumeâ, notes HGST in its press release.

HGST has already managed to garner attention of some data biggies like Netflix, CERN and Huawei for its Ultrastar He6.