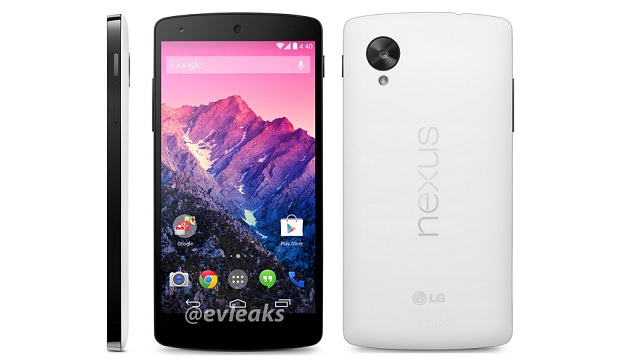 Nexus 5 has turned out to be the leakiest smartphone of recent time with leaks ranging from vague hazy images to full HD videos to even Google Play listing. Google hasnât officially announced the release date of Nexus 5, but there are those who speculate that the handset will be launched on October 31 or November 1.

Google has been tight-lipped about the Nexus 5, but it seems that the smartphone isnât able to conceal its own identity and has surface on the web every now and then.

One of the most definitive clue towards existence of Nexus 5 was Googleâs own video which captured its own employee using Nexus 5 during the unveiling of Android 4.4 KitKat statue at its headquarters. Google took down the video soon; however, rumours just picked up from where the video left.

End of September witnessed leaks of Nexus 5 running Android 4.4 KitKat with white and grey status bar icons. Further there were logs that accompanied the leaks indicating that Nexus 5 has a full HD display with 1,920 x 1,080 resolution.

After digging deeper into the logs leaked in September, there were traces that Nexus 5 has a camera based on MEMS technology. MEMS is basically the same technology that gave us tiny yet precise power efficient smartphone and tablet components like gyros, microphones and barometers.

The first week of October wasnât over yet and we came across a full-fledged service manual from LG for a certain LG-D821 smartphone â seemingly quite similar to the Nexus 5. The document detailed every little bit of information a smartphone repair person would require, ranging from schematics to component level troubleshooting any much more.

Second week of October saw a South Korean manufacturer Spigen teasing Nexus 5 cases. The image doesnât reveal a lot about the case as it just shows the back of the Nexus 5. The caption reads âNexus 5 Revolution Be Ready.â

Just three days after the Nexus 5 case teaser, a full 7-min video popped up on YouTube. The video showed Nexus 5 running Android 4.4 KitKat, matte like finish on the rear which is almost rubberized plastic, power button and SIM tray on the right, headphone jack on the top, volume rocket on the left and stereo speakers along with micro-USB plug on the bottom.

Clues on Google+ post signaled towards an October 18 launch, but a subsequent additional clue through official @kitkat account indicated an October 28 launch. Both the dates came and went by without any official unveil or a teaser.

Then came the ultimate of goof-ups directly from the horseâs mouth with Google Play Store publishing a listing of Nexus 5 for few minutes. The listing confirmed the price of a 16GB Nexus 5 at $349.

It was long rumoured that Nexus 5 will have a 2300mAh battery and a leak in the last week of October more or less confirmed the battery.

Just when we thought that we knew everything about the Nexus 5, a white press render of the smartphone emerged confirming the existence of Nexus 5 in two variants based on colours.

And finally what we have been waiting for â official packing of the Nexus 5 and pallets of the smartphone lying at a LG distribution center in Canada.