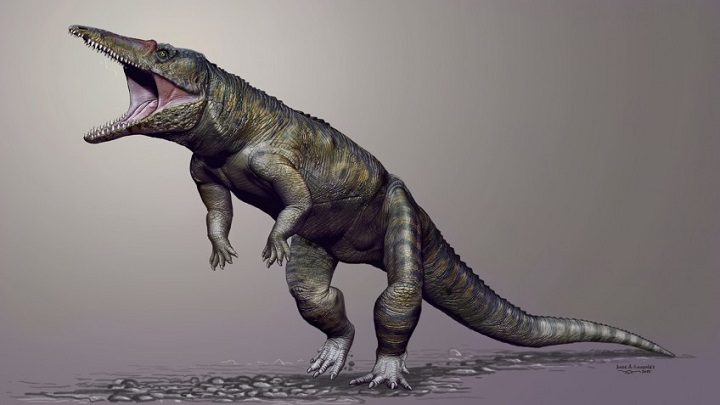 New findings have suggested that before dinosaurs took control of Earth – specifically North America – ancestors of today’s crocodiles, which are believed to be land dwelling and walking on their hind-legs, ruled North American lands as top predators.

Paleontologists from North Carolina State University and the North Carolina Museum of Natural Sciences discovered a crocodile-like ancestor, Carnufex carolinensis, or the “Carolina Butcher,” which was a 9-foot long, land-dwelling crocodylomorph that walked on its hind legs and likely preyed upon smaller inhabitants of North Carolina ecosystems such as armored reptiles and early mammal relatives.

They recovered parts of Carnufex’s skull, spine and upper forelimb from the Pekin Formation in Chatham County, North Carolina. Because the skull of Carnufex was preserved in pieces, it was difficult to visualize what the complete skull would have looked like in life.

To get a fuller picture of Carnufex’s skull the researchers scanned the individual bones with the latest imaging technology – a high-resolution surface scanner. Then they created a three-dimensional model of the reconstructed skull, using the more complete skulls of close relatives to fill in the missing pieces.

The Pekin Formation contains sediments deposited 231 million years ago in the beginning of the Late Triassic (the Carnian), when what is now North Carolina was a wet, warm equatorial region beginning to break apart from the supercontinent Pangea.

Lead author of a paper and assistant research professor, Lindsay Zanno, said that fossils from this time period are extremely important to scientists because they record the earliest appearance of crocodylomorphs and theropod dinosaurs, two groups that first evolved in the Triassic period, yet managed to survive to the present day in the form of crocodiles and birds.

However, the discovery of Carnufex indicates that in the north, large-bodied crocodylomorphs, not dinosaurs, were adding to the diversity of top predator niches. As the Triassic drew to a close, extinction decimated this panoply of predators and only small-bodied crocodylomorphs and theropods survived.

“Theropods were ready understudies for vacant top predator niches when large-bodied crocs and their relatives bowed out,” said Zanno. Predatory dinosaurs went on to fill these roles exclusively for the next 135 million years.