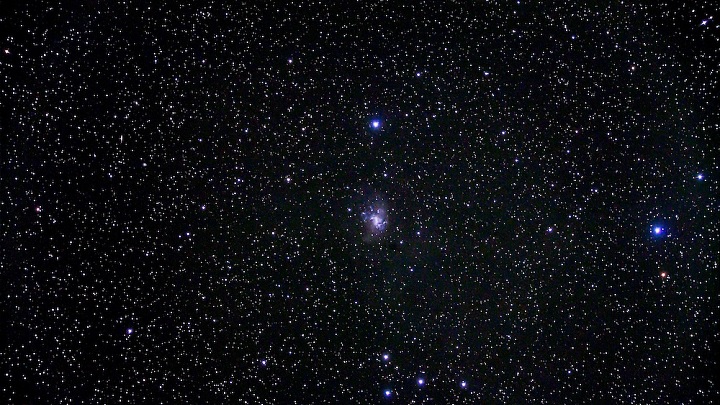 Astronomers at Carnegie Mellon, Brown, and Cambridge universities, have detected for the first time gamma rays emanating from a dwarf galaxy and they say that these emissions may provide clues to solving dark matter mystery.

Researchers say that the detection of gamma rays hint at the possibility of dark matter particles annihilating, a long-sought prediction of many dark matter theories. The exact source of this high-energy light was uncertain at this point, but it just might be a signal of dark matter lurking at the galaxy’s center.

“Something in the direction of this dwarf galaxy is emitting gamma rays. Thereâs no conventional reason this galaxy should be giving off gamma rays, so itâs potentially a signal for dark matter,” said Alex Geringer-Sameth, a postdoctoral research associate in CMUâs Department of Physics and the paperâs lead author.

The galaxy, named Reticulum 2, was discovered in the data of the Dark Energy Survey, an experiment that maps the southern sky to understand the accelerated expansion of the universe.

Carnegie Mellonâs Geringer-Sameth and Matthew Walker, and Brownâs Savvas Koushiappas have shown that gamma rays coming from the direction of the galaxy is in excess of what would be expected from normal background.

“In the search for dark matter, gamma rays from a dwarf galaxy have long been considered a very strong signature,” said Koushiappas, an assistant professor of physics at Brown. “It seems like we may now be detecting such a thing for the first time.”

According to a leading theory, dark matter particles are Weakly Interacting Massive Particles (WIMPs) and when pairs of WIMPs meet, they annihilate one another, giving off high-energy gamma rays.

Researchers say that if this theory is true, then there should be a lot of gamma rays emanating from places where WIMPs are thought to be plentiful, like the dense centers of galaxies. The trouble is, the high-energy rays also originate from many other sources, including black holes and pulsars, which makes it difficult to untangle a dark matter signal from the background noise.

This is why dwarf galaxies are important in the hunt for the dark matter particle. Dwarfs are thought to lack other gamma-ray-producing sources, so a gamma ray flux from a dwarf galaxy would make a very strong case for dark matter.

Over the past few years Geringer-Sameth, Koushiappas and Walker have been developing an analysis technique that searches for weak signals in the gamma ray data that could be due to dark matter annihilation.

âThere did seem to be an excess of gamma rays, above what you would expect from normal background processes, coming from the direction of this galaxy,â Geringer-Sameth said. âGiven the way that we think we understand how gamma rays are generated in this region of the sky, it doesnât seem that those processes can explain this signal.â

The study is published in the journal Physical Review Letters.