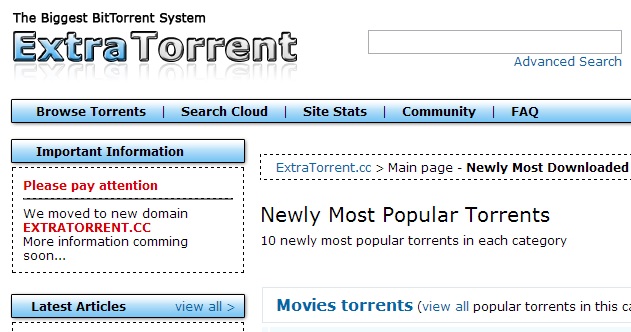 Google has removed the new home of ExtraTorrent â ExtraTorrent.cc â from its search results are MPPA and its members sent out targeting DMCA requests to Google.

ExtraTorrent.com was seized last month along with SumoTorrent, MisterTorrent and quite a few other torrent indexing sites as a result of the actions taken by Intellectual Property Crime Unit (PIPCU) of City of London Police. The PIPCU sent out letters without any legal backing to registrars of these domains claiming that the owners of the domains were involved in copyright infringement activities and they are liable to prosecution under various UK laws.

Google didnât completely follow through on this particular request and continued listing ExtraTorrent.cc. However, there was a second takedown request from Fox and this is the one which Google heeded to notes TorrentFreak. The DMCA request, which can be found here, claims that the ExtraTorrent.cc URL infringes on over 110 copyrighted movies.

Initially delighted over the non-action of Google on MPAA request, the ExtraTorrent team is âdisappointed that Google gave in so quickly.â

MPAA and its members have had a successful run so far this month has it has managed to takedown not only ExtraTorrent, SumoTorrent, MisterTorrent, and quite a few other domains, but have managed to force IsoHuntâs Gary Fung to settle outside of court. As part of the deal, IsoHunt.com has been shuttered and Fung will have to shell out $110 million in damages.