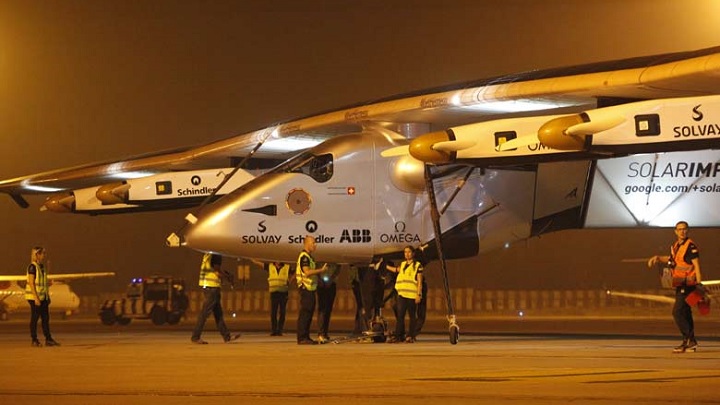 Solar Impulse 2 – the first ever solar plane aiming to fly around the world solely by power of the Sun – landed in India late Tuesday at 11:25 pm local time (1755 GMT) to finish its trip from the Omani capital Muscat in little less than 16 hours.

The plane landed in the western state of Gujarat marking the completion of leg 2 of its journey. The Live footage on Solar Impulse’s website showed the faint line of the plane’s white-and-blue lights in the pitch-black night as the Solar Impulse 2 approached

Members in the control room applauded as Pilot Bertrand Piccard, who was at the controls on the 1,465 kilometre (910 mile) journey over the Arabian Sea, landed at Sardar Vallabhbhai Patel International Airport. The plane will be in the city of Ahmedabad for four days during which “several events are planned on the theme of renewable energy and sustainable development”. From there the plane will fly off to the holy city of Varanasi in India in its leg 3 journey. The aircraft will then embark on its fourth leg to Myanmar on March 16. After Myanmar the plane will head to China, Hawaii and New York.

Solar Impulse’s flight over the seas are the most challenging parts of the journey for the only option left with pilots in case of power failures is to bail out and await rescue by boat. Much bigger crossings lie ahead as Piccard and fellow Swiss aviator Andre Borschberg, who alternate at the controls of the single-seat aircraft, traverse the great oceans.

The longest single leg in this epic journey around the world will see one of the pilots fly solo non-stop for five days and nights across the Pacific from Nanjing, China to Hawaii, a distance of 8,500 kilometres (5,270 miles).

Muscat was the first of 12 planned stops on the plane’s journey around the world from Abu Dhabi, with a total flight time of around 25 days spread over five months. Monday’s maiden leg took Borschberg 13 hours and two minutes.

Piccard was flying even higher as he entered Pakistani airspace on Tuesday, at 8,230 metres (27,000 feet), his support team said.The team hope to promote green energy with the circumnavigation attempt, which was ridiculed by the aviation industry when it was first unveiled.

UN chief Ban Ki-moon hailed the venture and congratulated the pilots. “With their daring and determination, we can all fly into a new sustainable future,” his spokesman said.

The pilots’ native Switzerland issued a special commemorative coin to mark the launch, which is the culmination of 13 years of research and testing.

Powered by more than 17,000 solar cells built into wings that and weighing only 2.3 tonnes – thanks to an innovative design – the weight of SI2 is less than one percent of the weight of the A380. The propeller-driven craft has four 17.5-horsepower electric motors with rechargeable lithium batteries.

It will travel at 50-100 kilometres per hour (30-60 miles per hour), the slower speeds at night to prevent the batteries from draining too quickly.

The plane can fly on autopilot during rest breaks but both pilots have undergone intensive training to prepare them for the long solo flights.

They have learnt techniques, including yoga and self-hypnosis, to allow them to sleep for periods as short as 20 minutes but still wake up feeling refreshed.

While in the air, the pilots are linked to a control centre in Monaco where 65 weathermen, air traffic controllers and engineers are stationed. A team of 65 ground staff is travelling around the world with the two pilots.

From there it will go on towards its starting point in Abu Dhabi via either southern Europe or North Africa, depending on weather conditions.